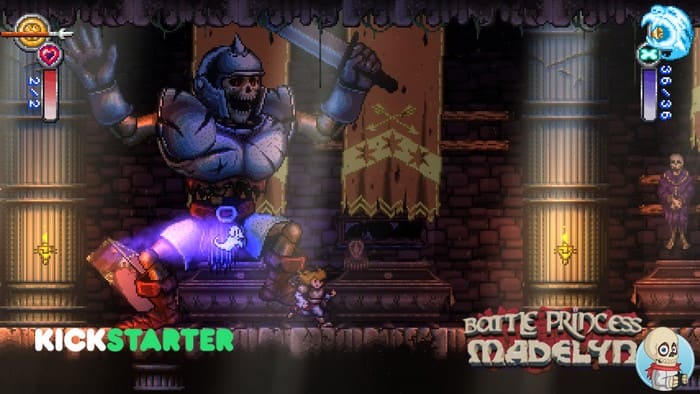 Causal Bit Games has today launched its Kickstarter for Battle Princess Madelyn, seeking a modest goal of $60,000 CAD and unlocked the Pre-Alpha to the public to sample pledging!

Creative Director Christopher Obritsch’s daughter Madelyn was obsessed with Ghouls ‘n Ghosts, so much that she wanted to be in the game so she could fight “Green Head”. When he informed her that it was unfortunately someone else’s game, but that he could make her one just like it. She said “but girls can’t be knights, Daddy. Only boys…” to which he answered “Pshh…What color do you want your armor to be?”. That was when Battle Princess Madelyn was born.

Set to release on Nintendo Switch and Wii U, PC, Xbox One and PlayStation 4, Battle Princess Madelyn looks to honor classics such as Ghouls N’ Ghosts and Wonder Boy 3: The Dragon’s Trap. Although the game style may be pleasantly familiar, the game has its own distinct and unique qualities and features – including an original story written by a professional children’s author that has hand drawn artwork bringing the game to life.

“After what seems like an eternity, we’re finally ready to show the world Battle Princess Madelyn! We’ve been hard at work over the last few months refining our Pre-Alpha build in order to let our fans sample our game before they pledge on our Kickstarter.” said Creative Director at Causal Bit Games, Christopher Obritsch. “We are also pleased to reveal that we have teamed up with Limited Run Games to offer some incredible physical rewards for supporting us on our crowdfunding journey and beyond. Play our Pre-Alpha and if you like it, please support our campaign!”

For more details and to download the Pre-Alpha check out the links below.