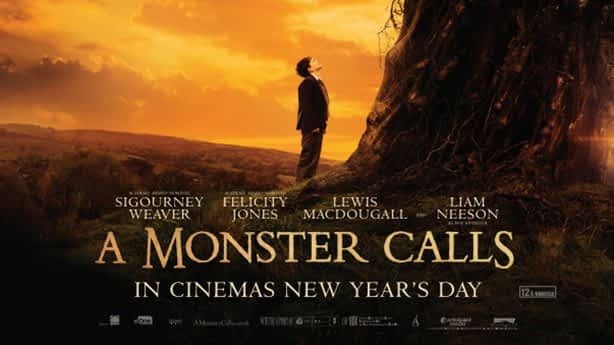 A boy seeks the help of a tree monster to cope with his single mother’s terminal illness.

You’d be forgiven for thinking that the ‘Monster’ in A Monster Calls is supposed to be Liam Neeson’s CGI tree-creature, who was so prominent in all of the posters (not this one though). This is just one interpretation, but the term ‘Monster’ could very easily be applied to the cancer that has taken hold of Felicity Jones’ character. The tree monster appears before her son, Conor, in order to help him come to terms with the possibility of losing his Mum, with emotionally devastating consequences. Director Bayona has proved remarkably adept at directing kids before (The Orphanage, The Impossible), but this feels like his most personal film yet. Needless to say, it has the emotional intensity of seeing a three-legged puppy fall off a chair, but over the course of 108 minutes.

In the near future, a weary Logan cares for an ailing Professor X, somewhere on the Mexican border. However, Logan’s attempts to hide from the world, and his legacy, are upended when a young mutant arrives, pursued by dark forces.

Superhero films have been fairly high quality and generally agreeable lately, but there are few that could argue that fatigue is definitely setting in. It’s not a spoiler to say that most modern superhero films will probably end in a big CGI set-piece and an after-credits sting that teases the next bloody one coming out in a few months’ time.
Logan neatly side-steps this issue by barely being a superhero film at all. Sure, it might star everyone’s favourite adamantium-clad mutant, but this is more of a Western than anything else. It’s a sombre, thoughtful reflection on Wolverine’s long life of fighting colourful villains, and he looks as worn out by the whole thing as we do. It’s incredibly refreshing to see a ‘superhero’ protagonist who looks like he’s in constant pain and barely keeping it together. Instead of questioning whether or not he’ll win against the bad guys, this all-too-real setting makes it feel like everyone has already lost (note the significance of it opening south of the Mexican border). Kudos to Hugh Jackman for sending this character off with a bang, but child-star Dafne Keen also deserves credit for conveying the vicious X-23 so convincingly. 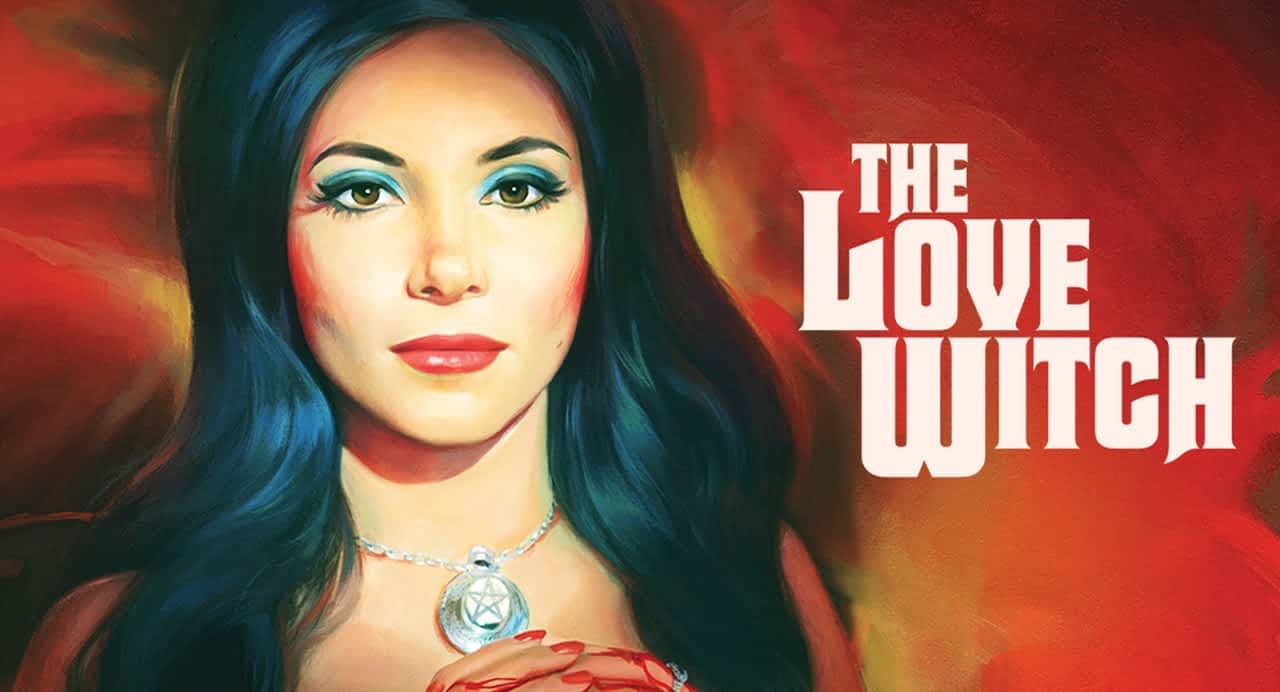 A modern-day witch uses spells and magic to get men to fall in love with her.

Boasting a colour palette that would be right at home at Hammer studios, The Love Witch is a nostalgic horror-lite romp with an appealing feminist twist. While it’s set in the current day, the mannerisms of our central characters are very much Hollywood circa 1950s. Exaggerated silences, dramatic zooming and remarkable wardrobes abound, made that much funnier in the context of contemporary cinema. The beauty of the film is that it could effortlessly blend in with the Hammer library of old, if it weren’t so pointedly empowering for women (a quality Hammer was sadly lacking back in the day).
Despite that, while the performance of lead actress Samantha Robinson impresses, the stand-out has to be the testosterone-fuelled Detective Griff Meadows for being more comically ‘Manly’ than a T-rex drinking a scotch on the rocks. 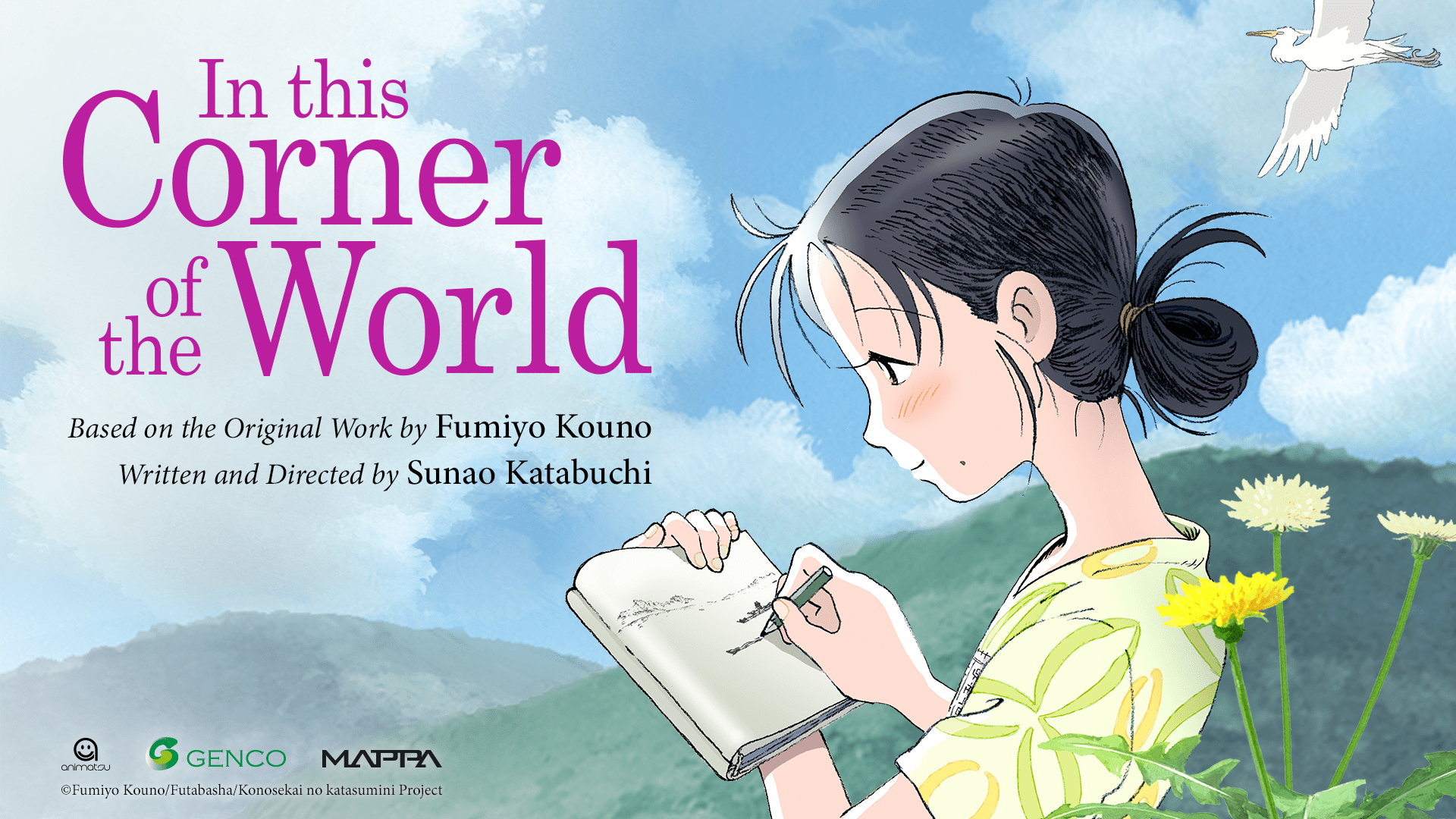 Set in Hiroshima during World War II, an eighteen-year-old girl gets married and now has to prepare food for her family despite the rationing and lack of supplies. As she struggles with the daily loss of life’s amenities she still has to maintain the will to live.

Every country that isn’t America can probably relate to the narrative of In This Corner of the World. We see through the eyes of Suzu, a young woman who has transposed her entire life in order to live with her previously unknown husband, Shūsaku, in Kure. While most war films will use the battles or war itself as the backbone of the narrative, here it is very much in the background. It might intrude every now and then in form of air raids (which are seen as equal parts terrifying and frustrating), but this is a simple story about a family trying to live as happily as history will allow them, while the world crumbles in their peripheral.

The story of a team of female African-American mathematicians who served a vital role in NASA during the early years of the U.S. space program.

The story is a traditional one; a group of underdogs trying to overcome adversity in order to prove themselves in their field. Replace NASA with the Olympics and it’s not that far removed from Cool Runnings. It might be a relatively simple film when compared to others on this list, but it boasts a number of strengths. The performances are solid, each of the three main characters more than adept at conveying strength and vulnerability in equal measure. The alternating but thematically similar arc each character undergoes gives the film an incredibly smooth sense of flow and variety. And, an often underappreciated quality, it’s uplifting. It might not explore racial discourses with intense scrutiny, but neither does the phrase ‘Black Lives Matter’. 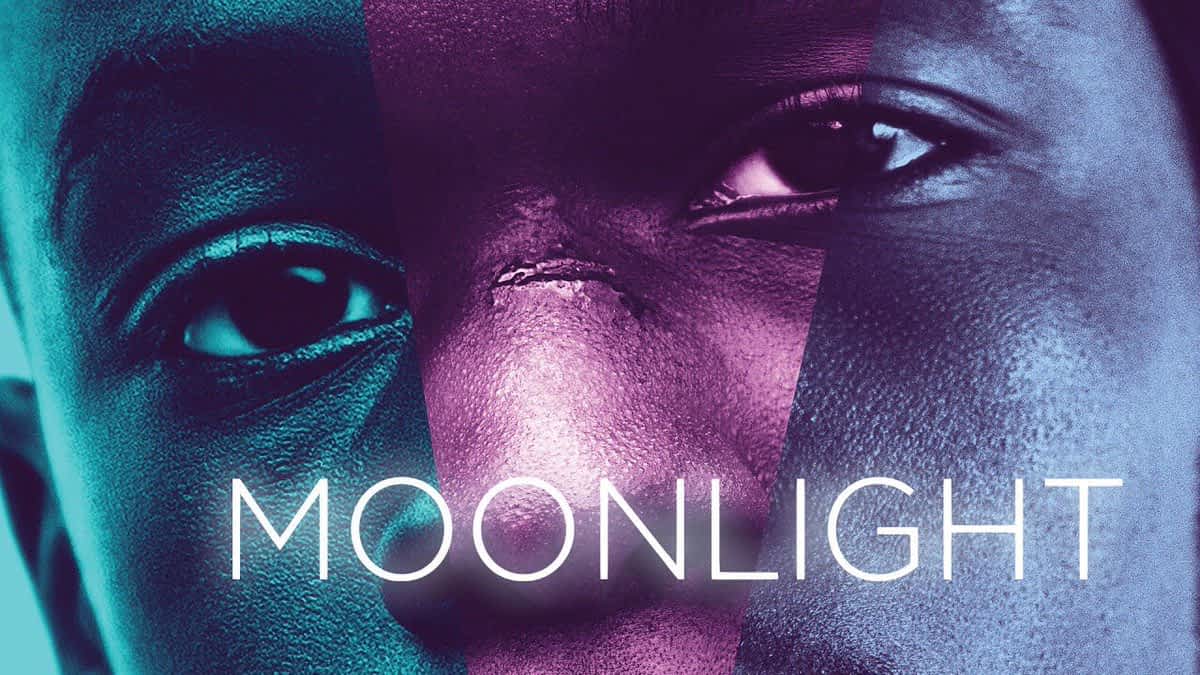 A chronicle of the childhood, adolescence and burgeoning adulthood of a young, African-American, gay man growing up in a rough neighborhood of Miami.

I mean, it won Best Picture. What did you expect? What I personally enjoyed about Moonlight was how artfully it was crafted, with intention to serve the story. A lot of films are very art-house simply because being art-house wins Oscars. Here, the decisions made in terms of sound, setting and visuals all serve a purpose in conveying (pointedly not telling) the story of protagonist Chiron as he discovers who he is.
For example, the juxtaposition of classical music with violent scenes shows Chiron’s desire to disconnect with the world and live a life of peace. He even disconnects with the audience as he gets older, visually represented by the increase of shots from his back. That’s because it’s society who pressures him into being a person he doesn’t want to be. These settings often feel claustrophobic, oppressive and it’s only in wide open spaces, such as the beach in which he and Kev first kiss, that he feels like he can express who he really is.

The story of a teenage boy, his mother, and two other women who help raise him among the love and freedom of Southern California of 1979.

A combination of nostalgia, an emotionally resonant theme (the malleability of masculinity) and three incredible actresses I admire are what made 20th Century Women such a winning film for me. In particular, the notion of insecurity and living with insecurity is something the film presents to us, not as a problem to be solved, but as a problem it might actually be acceptable to live with. No one character is represented as ‘complete’ or ‘content’. Fittingly, however, it does show that it is possible to be happy in spite of that. This is a rare feel good film that doesn’t gloss over some of the more prevalent issues present in young (and old) people’s lives. While its representation of men resonated with me personally, there is a rich tapestry of female representation here also that is very empowering while allowing for vulnerability.

Two strangers find themselves linked in a bizarre way. When a connection forms, will distance be the only thing to keep them apart?

Something about the way Your Name is presented makes it feel like a much bigger film than it actually should. Perhaps it’s the attention to detail, which often-times is staggering. Very few animated features will take the time to animate the imprint left by a hammer on wood. Or maybe it’s the imagery itself, which juxtaposes rural Japan with urban Tokyo and even dabbling in outer space in later scenes. Perhaps it’s just the structure of story, which evolves from cute coming-of-age to something much grander in a fairly seamless fashion. Whatever it is, Your Name is a film that feels sublime, with powerful emotion and spectacle that has been masterfully crafted. It’s a blockbuster that leaves cynicism on the doorstep, without sacrificing complexity or depth.

A depressed uncle is asked to take care of his teenage nephew after the boy’s father dies.

It’s always unfortunate when someone you dislike is associated with something you love. Putting Casey Affleck’s personal life aside and judging Manchester by the Sea on its own merits, it has to be commended (let’s not forget that a film is so more than just the actors within it). Here, we are presented with a level of grief that is difficult to comprehend in its intensity and manifestations. We see that Affleck’s Lee has clearly suffered a loss, one he simply can’t move on from. His commitment to his work as a caretaker, a ‘fixer’ speaks volumes as we learn more of his past. What impresses is how director Kenneth Lonergan portrays grief and how it affects the world around us. There are moments of bizarre humour, puzzling anger and chaotic sadness that all feel sensationally genuine in the face of anyone who has suffered a loss. 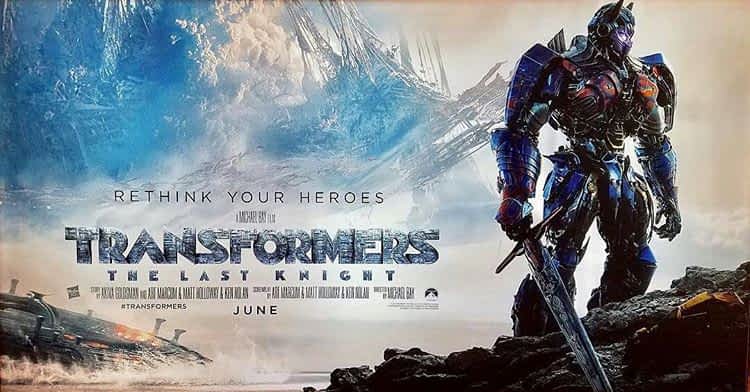 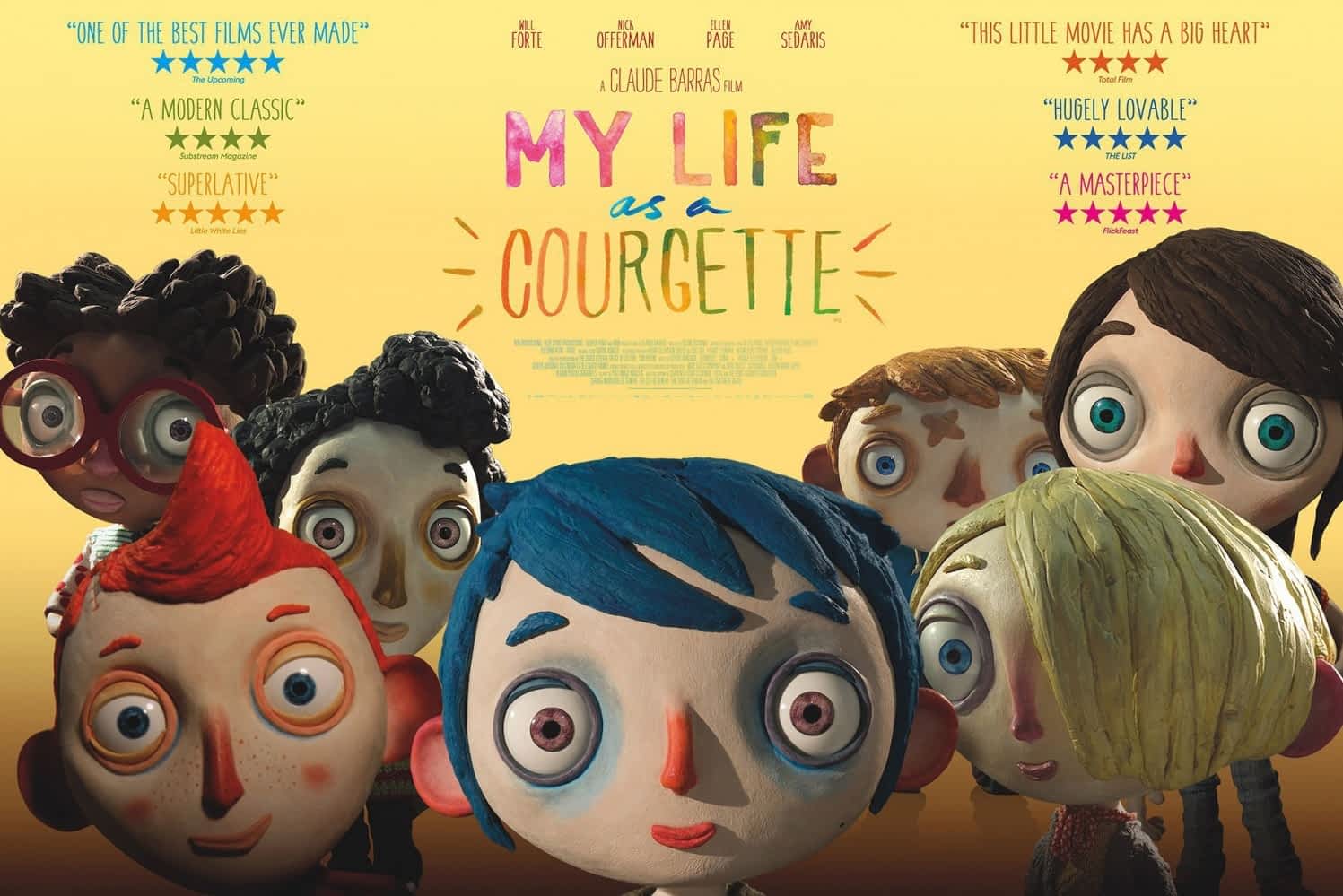 After losing his mother, a young boy is sent to a foster home with other orphans his age where he begins to learn the meaning of trust and true love.

The best film of the year that nobody has seen…in my opinion. When the only problem you can find with a film is that it isn’t long enough (it’s only 70 minutes long), you know you’ve stumbled across something special. Wielding a shield of hope and a sword of unflinching honesty, My Life as a Courgette is a heart-warming, uplifting story in spite of overwhelming odds. It deals with some incredibly dark material (including substance abuse and domestic violence), but in doing so exhibits a sincerity rarely seen in children’s films. It doesn’t shy away from the difficult situations many children often find themselves in. Instead, it offers an olive branch; it puts forward the idea that sometimes light shines strongest through the cracks of those who feel a little broken.
And if that doesn’t tug at your heartstrings, maybe you SHOULD go watch Transformers: The Last Knight