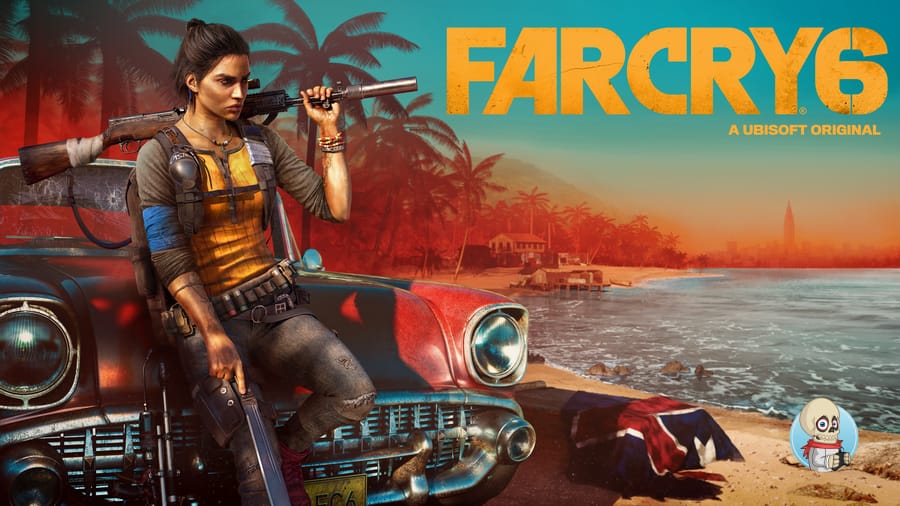 If you would prefer to listen to this review. It is now available on Spotify as a Podcast.

Far Cry 6 is, for better or worse, more Far Cry. If you love the Far Cry series and all you are after is another outing in a very polished open-world playground. Then Far Cry 6 is one of the best in the series.

But If you are hoping that Ubisoft is about to deliver something that re-invents the series, then you will likely be left a bit disappointed.

Set on the fictional Caribbean island of Yara, the huge open world is full of lush vegetation, exciting wildlife and dangers at every turn. Yara is ruled over by charismatic dictator Anton Castillo. Castillo is voiced by Giancarlo Esposito (perhaps best known as Gustavo “Gus” Fring from Breaking bad/Better call Saul) and he delivers an equally chilling performance in this role.

Castillo’s vision for a perfect Yara is built on their ability to produce a new cancer treatment called “Viviro”. Viviro is produced by spraying tobacco plants with an incredibly toxic chemical, that brings with it horrific pollution and military brutality not seen on the island before.

To maintain the production of Viviro to meet the demand from the world, Castillo steals the farmland and enslaves the people of Yaran to work in this industry, an industry that is leading to horrific illnesses and death from chemical exposure in the local population.

You play as a local Yaran called “Dani Roja”. Unlike other games where you are a normal Joe Soap that learns to be a killer. Dani has some background to explain the skills. As an ex-military conscript, Dani now turns into a reluctant guerilla freedom fighter.

As you try to escape the island in the opening scene. Your boat gets gunned down and everyone bar Dani gets killed. Washing up on the South Coast of Yara, Dani heads off to meet with a guerilla movement known as the “Libertad”.

From here you will team up with a host of new characters and set about disrupting the production of Viviro.

Which boils down to essentially blowing up everything and anything you can find. The combat is the usual “over the top Far Cry” combat we have come to expect, which might feel at odds with the more serious tone of the subject matter. But for some reason, moving from torture scenes to blowing up refineries with your pet crocodiles kind of works.

Far Cry’s charm is that it is a playground for you to experiment in. If that means making use of all the crazy weapons and burning the whole place to the ground, then you can do that. If you want to stay a little bit more toned down, stealth is always an option.

Soft target rounds for normal uniformed soldiers. Armour piercing rounds for enemies with heavy armour. This extends to selecting the right type of clothing, should you need protection from fire or chemicals for example.

A lot of the weaponry you use is built using whatever scraps can be found. This runs through the game from the silencers to scopes on your guns, all the way up to the Supremos.

Supremos are cobbled together from random parts and powered by depleted uranium. These weapons are devastating ultimate abilities. Ranging from a barrage of missiles shot from a backpack. To poisons that turn enemies against each other, or ghost vision that shows you where enemies are hiding behind doors or walls.

Far Cry 6 is very polished and the quality throughout is very high, but, it is not without its challenges. Having to swap your load outs and clothing can be cumbersome in the UI. However, the most notable frustration comes in the form of mid-combat animations. For example, when you need to heal you are stuck in an animation for a few seconds as Dani is either pulling shrapnel from your arms or is cauterising a wound with a cigar. A similar animation happens when reloading, so when you need to reload and heal at the same time (which happens a lot in such a combat-heavy game) it can take more than a couple of seconds to complete, which is more than enough time to get gunned down by the enemy. Leading to numerous incredibly frustrating mission restarts.

But perhaps that just means I didn’t have the right tool for the job.

Overall: As mentioned in the start, if you don’t already like Far Cry games then this is not going to change your mind. But for those that love Far Cry games, you will find one of the best. It is full of crazy weapons, crazy animal sidekicks, crazy enemies and crazy over the top combat.

This insanity is all set in a beautiful massive open world full of missions, side quests, and collectables. With a story that is engaging right to the end ensuring that if nothing else, Far Cry 6 is a ton of fun.

Note: Thanks to Ubisoft who provided a code for this review. The game was played on PS5 in single-player mode only. There is a Co-Op option available but it was not part of this review.