Game Dev Tycoon is a business simulation game created by the developers at Greenheart Games, that allows the player to create their own game company as they build their games from the ground up. You start out in your garage as you work on your PC, cranking out indie games as you begin to gain a small following of fans.

The premise of the game is that you are a budding game development company, in which you must combine “topics” and “genres” together to create and publish the finished product. For example, the topic “medieval” and the genre “RPG” is a great combination but you must take into consideration which gaming console you are to release it on, for not every game suits every console. 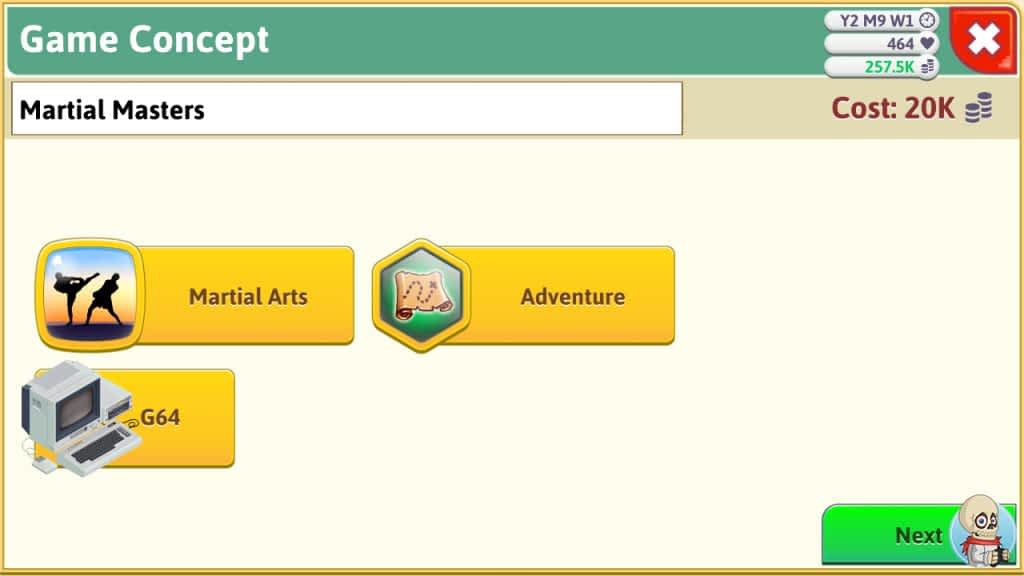 For example, strategy games work great with PC and the G64, whereas they won’t nearly be as successful if you were to release them on the TES or the Master V.

Once you release your game, reviewers will then rate your game from a score of ten – this will be where the trial and error process begins. After the reviews are published, depending on how well received your game is, you will see how many units you sold until the game is taken off the shelves. At any given time, after you’ve published a game, a game report is generated – which tells you what areas you succeeded in and what areas you didn’t. 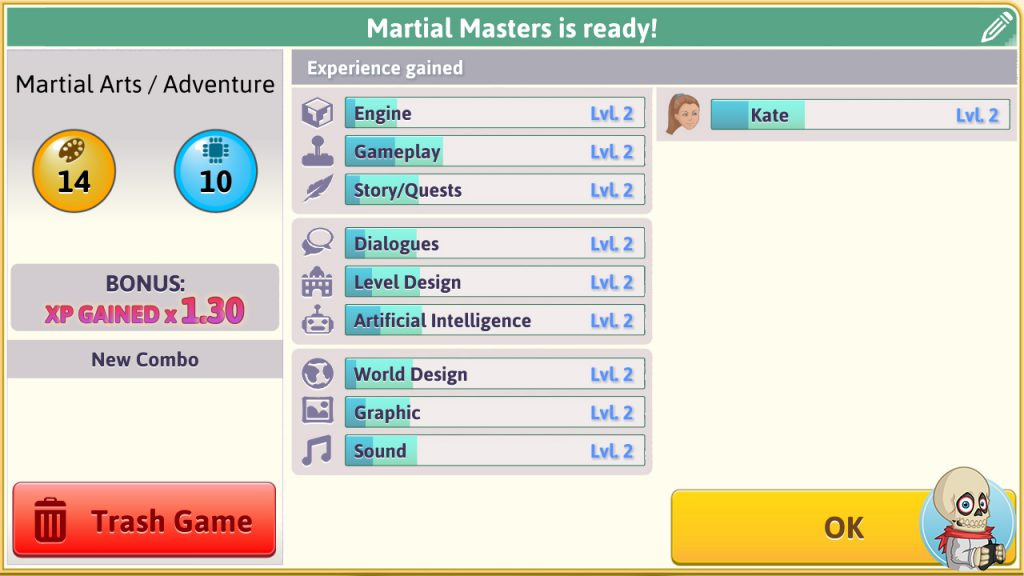 As you progress throughout the game, generating more sales and a steadily growing fan base, you will be given the option to move from your garage and into a new office space. With moving, you have more responsibilities within your game developing company. You need to train yourself in areas that enhance your skills; coding, artwork, design and speed. You will also need a team of developers that specialise in different areas, like technical design, artwork and complex algorithms – keeping in mind that if you pile on too much work on top of your team, they will tire out faster, causing development to slow down and your workers to suffer burnout.

Once you have established a team of 3 members or more, you will be able to create “medium” sized games – which means you will have the option to slot in your developers to focus onto specific areas of your game, like level design, artwork, storyline and the game engine. The more diverse your team members are, the more likely you are to create a strong and incredible game. 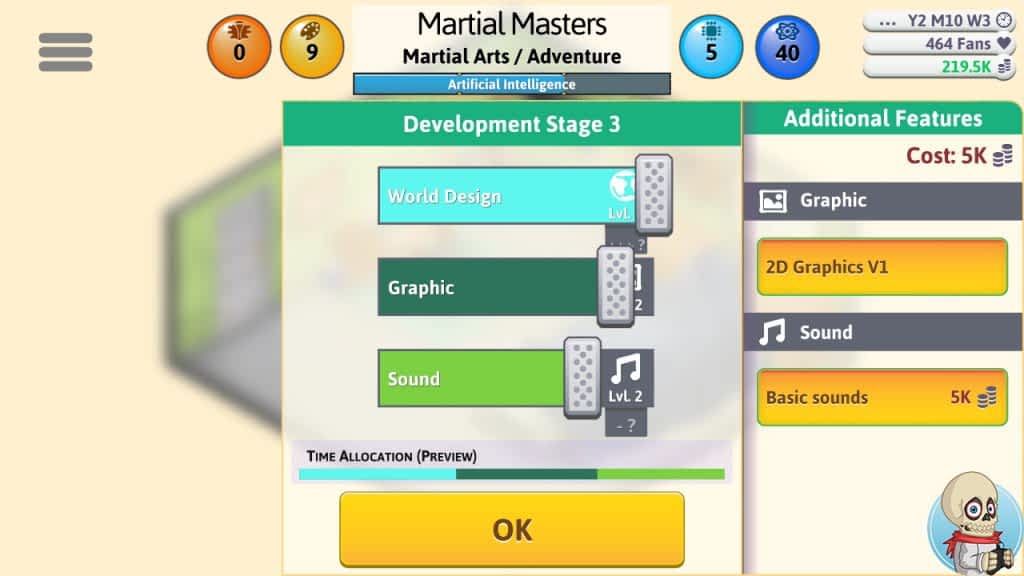 There is also the option of taking on contracts from other game companies, in which the player can choose to take on from a small selection, in case funds run low. Keep in mind that there is a time limit in which the player must complete the contract, so if you fail to finish it, you will be deducted a hefty fee!

The mechanics of the game can be daunting at first; if you aren’t used to play simulation/strategy games or have never tried one before, there’s a lot of information to take in. You need to go through a lot of trial and error before you get the knack for developing games. Once you do, the game becomes incredibly addictive; before I knew it, an hour had passed as I was growing my team of developers in my new office!

The graphics hold a vibrant colour palette that is easy on the eyes for long periods of time, alongside the music being catchy and upbeat, which helps keep you in the zone, to create great games. If you become famous enough as a developer, you can attend G3 (Hmm, sounds vaguely familiar…) to showcase your latest title, gain a larger following, and keep expanding your company to eventually produce not only games, but consoles, in your own R&D department. 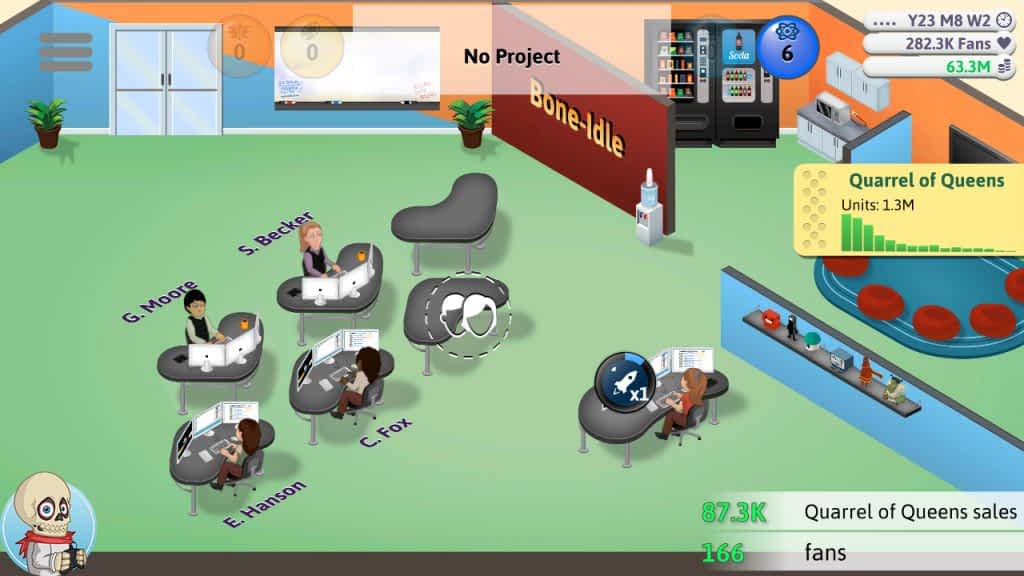 In regards to battery consumption, I tested it on the Samsung Galaxy S7 Edge at 87%. After 10 minutes of play, while being connected to the internet, it dropped to 80% – which is a bit of a drop if you plan to play the game for longer periods of time. Depending on the condition of your phone battery, playing the game can be quite taxing on even the freshest of batteries, so you may want to bring a charger or a battery pack if you wish to play it on the go.

Wonderfully addictive and filled with clever Easter eggs that will bring a smile and nostalgia to all game aficionados, Game Dev Tycoon is highly recommended for everyone to play and enjoy.