Considering the marketing for Passengers, it is very easy to write this project off as a simple star vehicle for Chris Pratt and Jennifer Lawrence. The notion isn’t so much implied as it is launched explosively through the atmosphere before our very eyes.

Yet, while seeing two of Hollywood’s most likable stars sexing each other up on a spaceship is certainly crowd-pleasing, the film doesn’t rest entirely on their star-power alone.
Light and dark segments alternate to keep the tone fresh and, while it doesn’t dwell on them, there are some intriguing questions being asked here.

Oh, and you get to see some butts too.

…so yes, it is a star vehicle first and foremost. It just happens to have a sidecar with a few neat little features. The film’s strength is very much in Jen and Chris’ chemistry, and it is happy to play to that strength.
Any competent director will be aware of this. Morten Tyldum certainly is and he wisely gives us plenty of time to get to know Jim and Aurora before anything truly terrible happens.

In a sense, it shares some DNA with 2007’s I Am Legend. Both films featured isolated individuals living in a large, empty playground.
And both films were more interesting during the quieter moments, before their third acts were injected with adrenaline. Ponderous questions about the human condition are very quickly substituted with urgent questions about engine failure, the kind of which we’ve heard many times before.

This isn’t to say Passengers ends badly, it doesn’t. It maintains its momentum, and the action is particularly well edited, but it does drift towards a notably more formulaic conclusion. A dilemma arises, there’s a lot of running around and some things do a little exploding. One particularly nerve-shredding scene involves Aurora trying to escape a rogue swimming pool.
For all the intensity that’s in it however, it’s just not quite as engaging as Jim and Aurora’s first breakfast together. 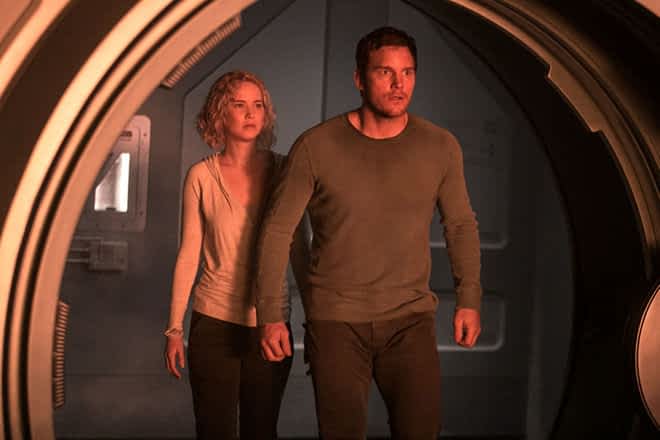 After all, it is the characters we want to get to know. This is, in every sense, a film about the journey rather than the destination. Unsurprisingly, Pratt and Lawrence have natural chemistry and seeing them get to know each other is as much of a treat as you’d expect. You get the sense they were having burping competitions in between takes, they have that much fun together.
Their dialogue, for the most part, bounces off one another like a professional tennis match. The writing is solid, with some notable dialogue exclusions that are confidently conveyed through action instead. And while it’s all very touching, they are careful never to take things too seriously.

Jennifer Lawrence and Chris Pratt don’t do romance, not as we know it.

Of the two, Jim is given the most screen-time. A significant portion of this he spends alone, and this segment is a lot of fun to watch. It’s obvious that great lengths were taken to make him appear relatable and likable. An early argument with a breakfast dispenser (straight out of The Jetsons!) highlights his low brow nature, and his gleeful abuse of the unsupervised class system aboard the Starship Avalon makes him very easy to root for.

His character is certainly more grounded than that of Guardians of the Galaxy’s quipping Starlord. But you do get the sense that they came out of the same gene pool.
This is largely due to an early dance-off that is strongly reminiscent of GotG. And you have to wonder if it’s just part of his contract at this point.

Jurassic World 2 will prove very interesting if this is the case.

Lawrence fares even better, managing to wrap genuine despair around her humour without spoiling either. She’s easily as breezy as Jim at the best of times, but brings a certain darkness that elevates the film above mindless entertainment.
Something as straight-forward as standing up and walking away is given tremendous weight in her capable hands. And a dark-as-death scene in a bedroom borders on the horrifying. The contrast between this and her openly approachable nature is what makes Aurora so well realised as a character.

They are, in essence, a pair of teens who have been permanently locked in a shopping mall after hours. They are liberated in their total isolation, which adds a nice twist to the romance genre. They have nothing to lose, so it’s interesting to see what societal norms they keep and which ones they decide to throw away.
This all culminates in a very off-limits stroll in zero gravity. Combining sci-fi wonderment with romantic cheesiness isn’t a perfect fit, but it’s enough of a novelty to make their relationship interesting.

The olive in this cocktail of witticism and endearment comes in the surprise form of Michael Sheen. As a dish-scrubbing android bartender named Arthur, he has a small but pivotal role to play. As such, you would naturally expect a passable but unremarkable performance.
Yet Sheen, like all the other machines on the spaceship, always provides exactly what is needed in all of the scenes he’s in. He brings levity to Jim and Aurora’s first date, and adds a modicum of emotional weight as the film progresses into more grim territory. He is permitted a personality and that, coupled with his impressively subtle robotic nature, makes him the most memorable presence of the film.

No easy task, considering the talent he is competing against.

People tend not to visit bars during a crisis though and this is another reason that the final act doesn’t quite live up to the strong opening. Everyone is too focused on ‘doing’ instead of ‘being’, so the film loses some of its personality.

What doesn’t help is the fact that the ship’s interior is a drab, boring place that doesn’t have much personality to begin with. It’s less noticeable when all our attention is drawn towards our wonderful lead actors. And some of the darker moments use lighting in clever ways to make the setting superfluous. Yet, when almost the entire focus turns to fixing the ship, the dull greys and whites are almost painfully emphasised. It’s a capable closing act, but a somewhat forgettable one.

Passengers is a sci-fi movie that boasts a smart premise but it isn’t as smart as it could be. Instead, it’s a blockbuster and a star vehicle that competently ticks both boxes. Its strength is in the characters and they put more of themselves into the film than it actually deserves.
You will delight at their chemistry and feel genuine fear in the darker, more memorable moments.

Just don’t expect answers to any of life’s big questions
…except who among them is the better dancer.