***WARNING. THIS REVIEW CONTAINS MINOR THEMATIC SPOILERS FOR THE EARLY PORTION OF THE GAME**

We’ve had quite the wait for the fifth entry in the Persona series. Originally beginning as a spin off from the sprawling Megami Tensai series of games (which contains over 70 different titles including spin offs but not including remakes or re-releases), the Persona games have arguably eclipsed the popularity of its various sister series, beginning with Persona 3 in 2007 (2008 for European players). 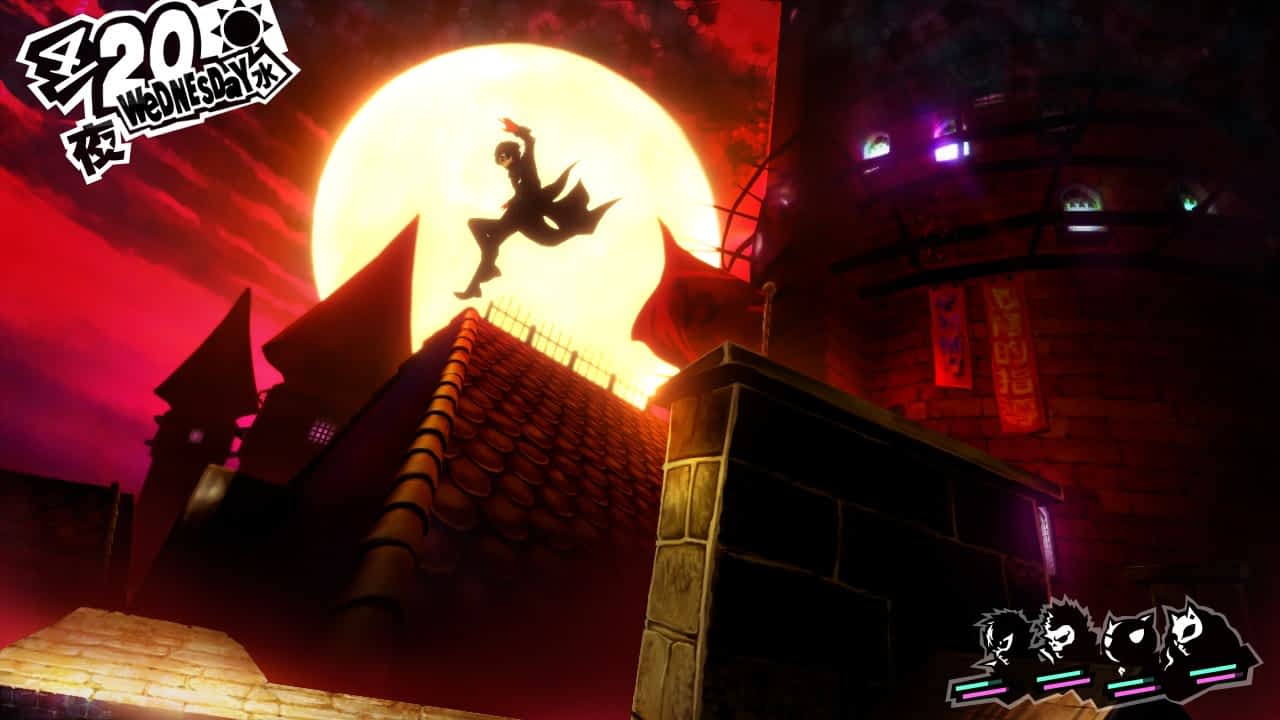 The next main title in the series, Persona 4, was released in Europe in 2009. It brought even more eyes to the franchise, improving on P3‘s already strong writing, art direction, music and gameplay, and earning high praise from fans and critics alike.

So, when Persona 5 was announced in 2013 with a winter 2014 release date, fans of the series were very excited. How would this latest addition to the series build upon the success of the games before it?

In the four years since P5 was announced, there have been several delays, two updated re-releases of P3, one updated re-release of p4, two fighting game sequels, a rhythm game spin off, multiple animated films, a compendium of comics, several concerts, a stage-show for each game in the series, numerous side games released under the wider Megami Tensai name, and the stand-alone mature puzzle-platformer Catherine.
With so much content, would the series be over-exposed? Would it be worth the wait? 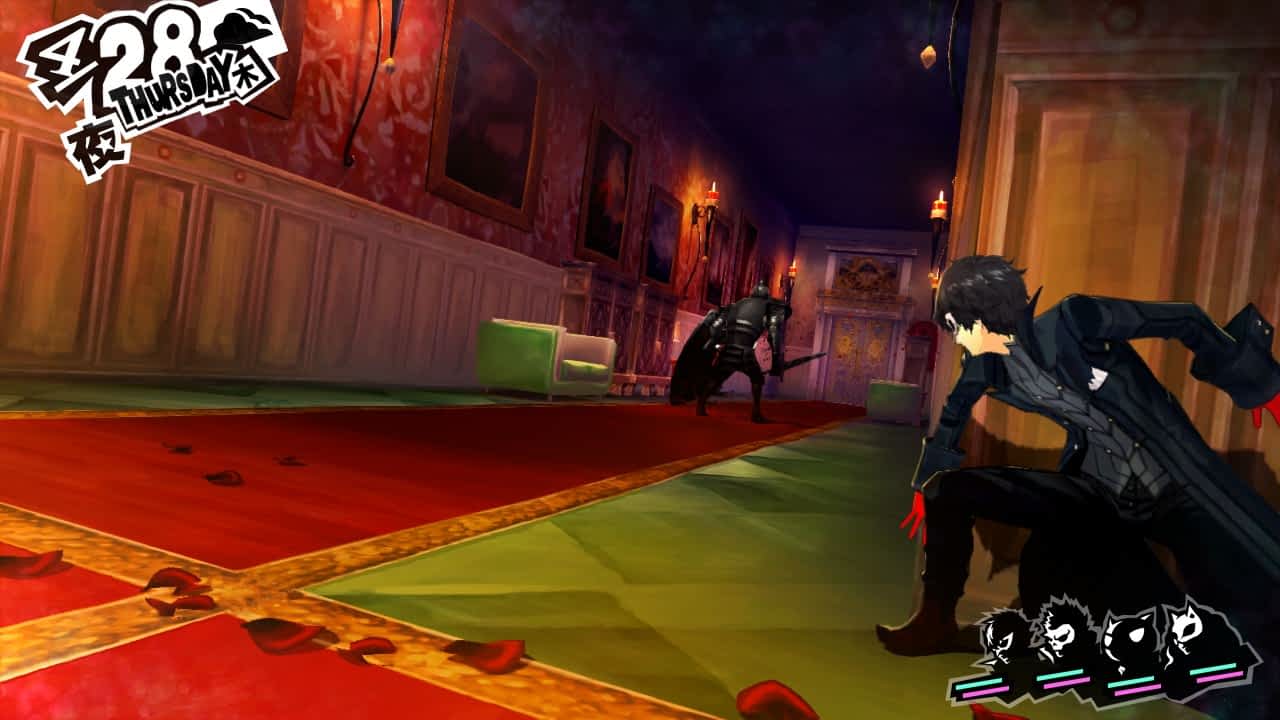 From moment one, Persona 5 is overflowing with charm and style to spare. It’s clear the delays were worthwhile, with the time used to polish the entire game up to a glossy sheen. A lush animated opening sets the scene as you’re dropped full speed into the story In Medias Res.
Strong striking colours dominate the screen as you, a high school student moonlighting as a Phantom Thief, attempt to make your escape from your latest heist. Except, you don’t quite get away without a trace.

You wake up in a police station, roughed up, handcuffed and possibly drugged. A detective asks if you want to do this the easy way or the hard way, prompting you to choose the difficulty level of the playthrough. You’re asked to sign a confession, which segues into you choosing the name of your character.
These are the first of the many little touches that P5 does so well, combining narrative elements with gameplay, adding depth to both. 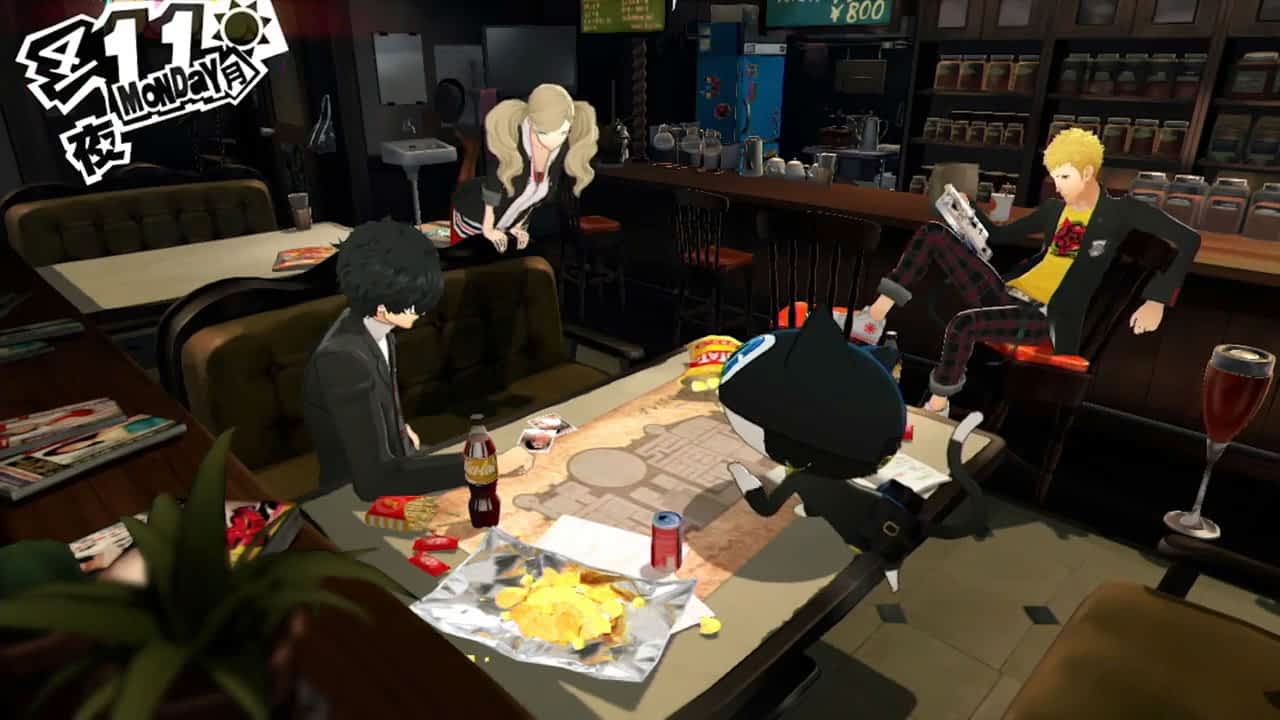 Also noteworthy is the impeccable graphic design. Use of fonts and text boxes are universally excellent. As you walk around the city of Tokyo, speech bubbles will pop up with relevant flavour text, catching your eye without being obtrusive. The quality of the user interface in particular sets the bar for the entire genre.
In role playing games, you spend more times in menus than any other genre and poor UI design makes for a poor experience.
Therefore, it makes perfect sense to have them as slick, responsive and stylish as possible.

All of this is achieved with a crisp combination of black, white and most notably red. This choice of colour scheme is no accident. The dominant colours in the previous games in the series have been strong reflections of the overall themes of the game, a topic I’ll expand upon momentarily.

In short order, we’re dropped into a flashback to when you first moved to the city, introducing the narrative structure used through the rest of the game (interrogation, flashback to gameplay for several hours, interrogation, et cetera). You’re a student with a criminal record you don’t deserve, framed for attacking a man after stepping  in to stop him committing a sexual assault. 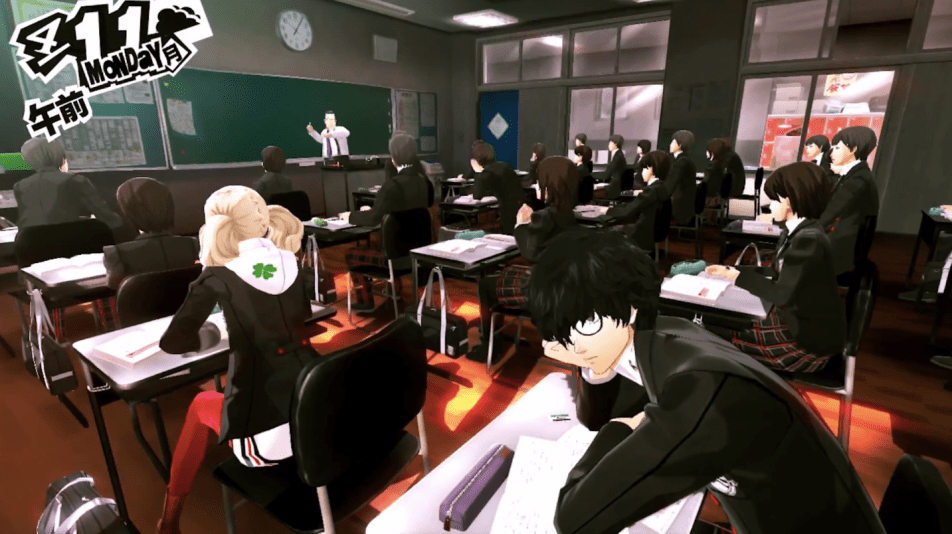 Thus, you are a social pariah, ignored at school and viewed as a nuisance by your guardian, constantly cautioned from stepping a toe out of line. This makes for an interesting change from P3 and P4, where your canonical characterisation was a slightly standoffish, stoic loner and an affable, charismatic weirdo respectively.

You find a strange app that refuses to be deleted on your phone, and the next morning, you meet a new classmate, an athletics star turned delinquent named Ryuji. Together, you head towards your new high school, only for the app to activate and bring you to an alternate dimension known as the Metaverse, transforming your school into a large castle, complete with dungeons and guards.
Some exploration reveals the castle is a distorted version of the school, created by the twisted perspective of your gym teacher, Kamoshida, who fancies himself as the ‘king of the castle’ who can bully male students and sexually abuse female ones.

This results in two separate entities for Kamoshida; the real one who is unaware of the castle and the Shadow one who controls the castle. While the real Kamoshida imposes his will on the student populace, the Shadow version tries to have you and Ryuji executed, which awakens the power of your Persona, a concept straight out of a Jungian psychology textbook.
The titular Persona is a manifestation of a characters personality, allowing them to fight and defend themselves in the Metaverse, leading to the more action orientated aspect of P5’s gameplay. 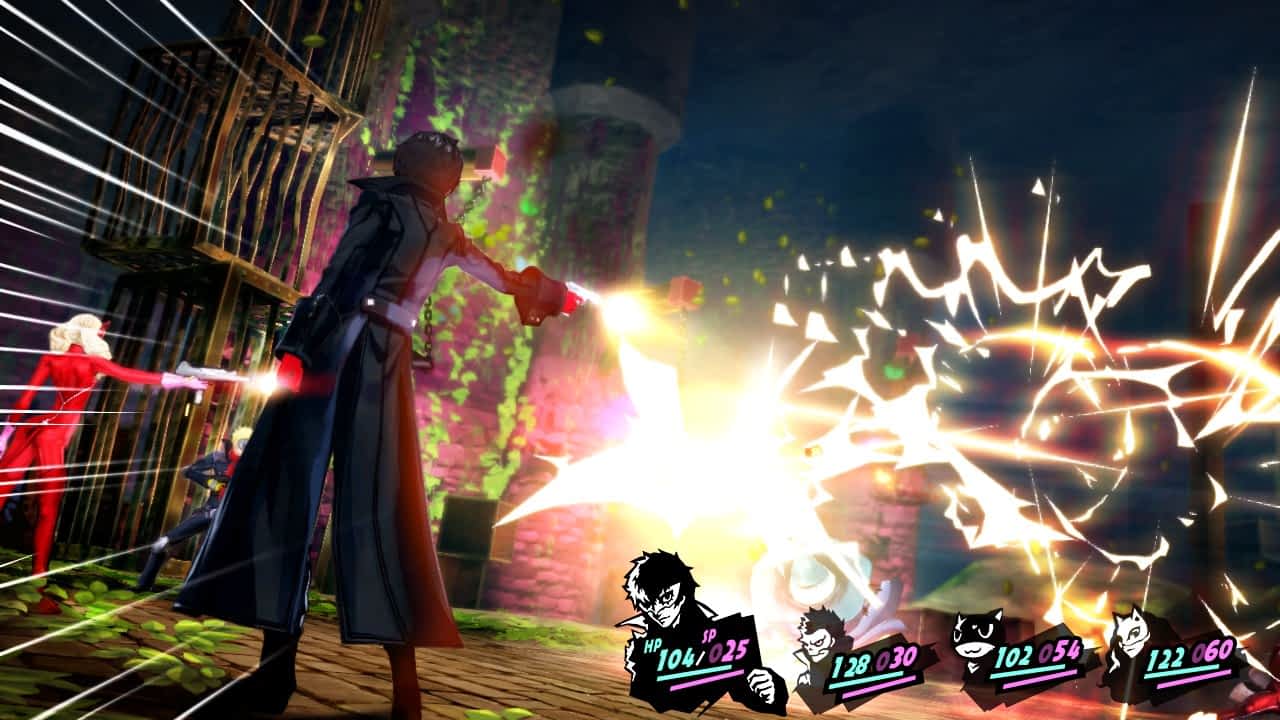 Battles are equal parts Pokémon and Final Fantasy X, although tactically deeper than either of those games. You choose what action your character takes with no time limit, taking either an offensive, defensive or supportive role. Enemies have different weaknesses, which can be exploited to gain additional turns, which in turn can either be used by the same character or ‘baton passed’ to a different character, who may be able to exploit a different weakness or finish the enemy outright. Battles are lost whenever the player character dies, and so his abilities are more versatile and powerful than the rest of the cast, enabling you to protect him at all costs.

Soon thereafter, you meet a couple more team-mates and conspire to infiltrate the castle and make Kamoshida atone by ‘taking his heart’, which is your main objective for the opening hours of the game. You spend equal time in the Metaverse battling your way to the top of the castle, as well as in the real world as a normal student.

This is the other half of the gameplay; an expansive time management simulator. You’re given a few time slots each day, and can choose how to spend this time how you wish. Do you go to the library to improve your knowledge so you can talk to the student council president? Do you go home and learn to make coffee with your guardian? Do you spend an evening making lock picks for your infiltration? 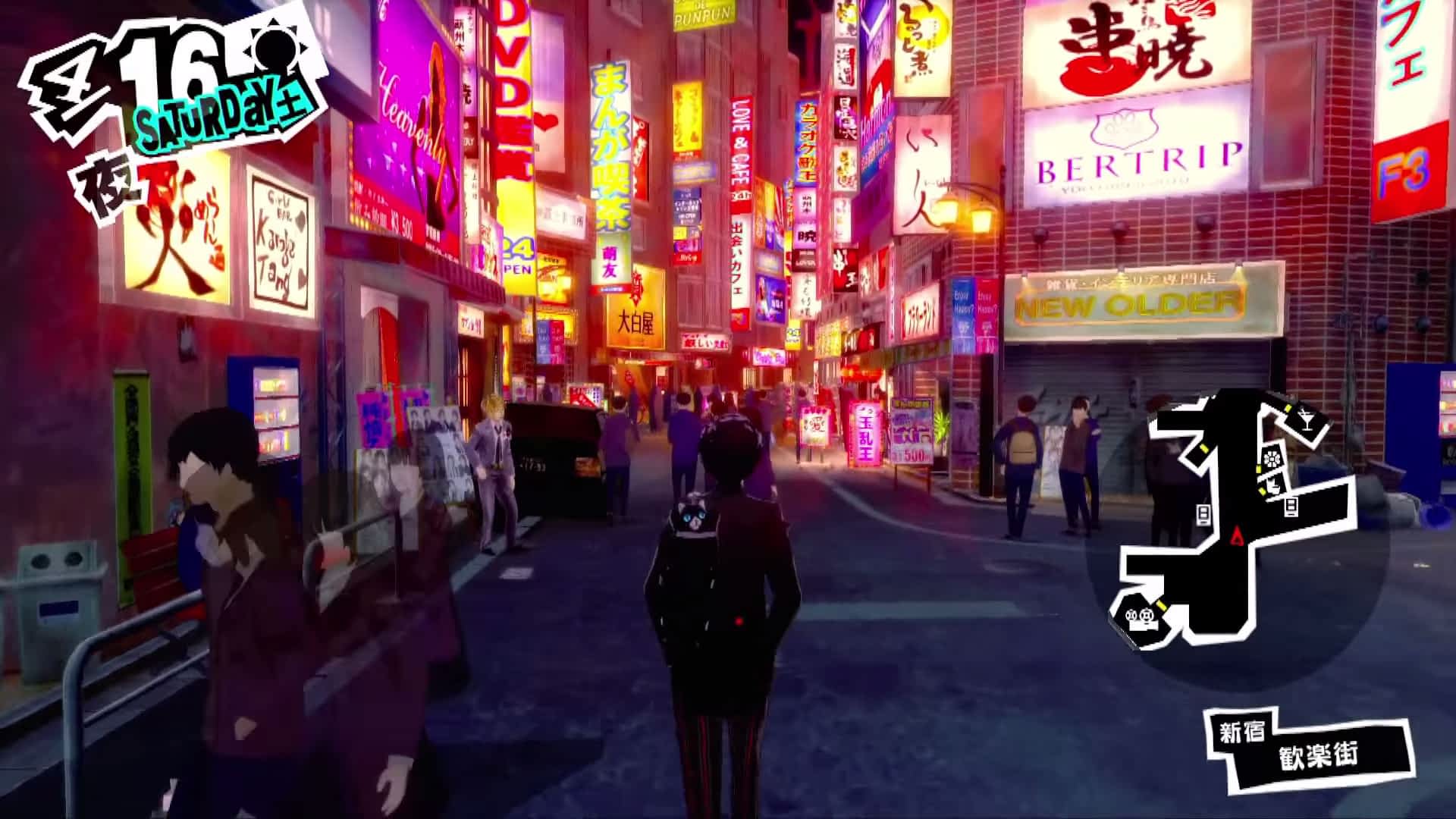 Each activity you can do has different tangible benefits. By spending time with various people, you can build a rapport with them, creating a valuable confidant and earning abilities that make navigating the Metaverse a little bit easier. Would you rather catch a train with Ryuji to visit his favourite ramen shop so that he’ll take a hit for you in battle, or work part time at a local bar to impress a local politician so you can take more money from enemies?
There isn’t enough time to do everything so you have to choose wisely, a decision made all the more difficult by the quality of the writing.

Characters have understandable motivations for spending time with you, and develop as you grow closer. This is another example of the true strength of P5, combining narrative and gameplay elements into a cohesive unit. Confidants with especially useful abilities endear themselves to you, meaning you have substantial reason to see their personal growth through to the end, meaning you have personal investment in even the weakest members of the cast (although I would hesitate to call any of the characters actually weak).
It’s a genius way to build on the typical strength of the JRPG genre. 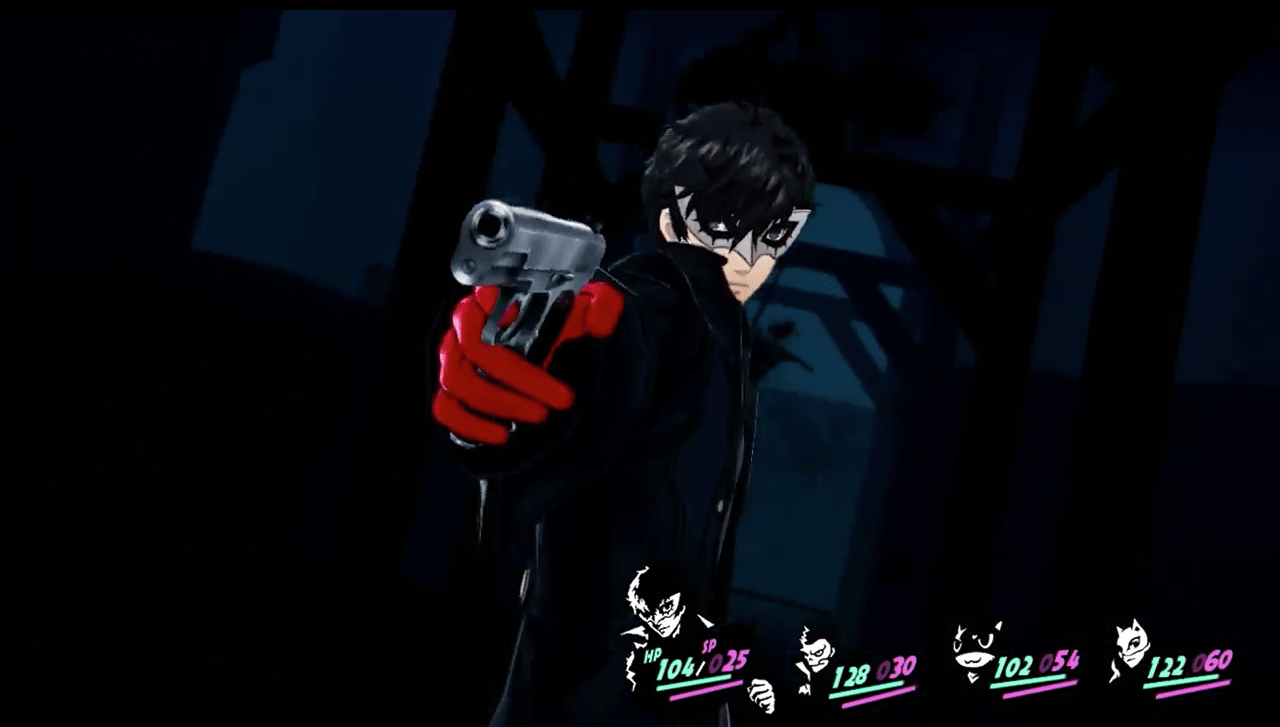 In addition, the music is frankly astounding. Moving on from the hip hop and pop-rock of previous games, composer Shoji Meguro has integrated a lively funk-lounge feel into his style. It carries the game along  with its bouncing pace. Every time you boot the game, you’re treated to a lush, smooth funk track urging you to fight for change.
When you gear up to fight a boss, the thumping drums and rumbling bass build into a soaring guitar solo that never fails to get you hyped to kick some ass.

The voice acting is to be commended as well. Voices match up to characters perfectly, and the tone of the main cast members are totally diverse from each other, adding nuance to every story beat.

The visuals and the audio combine in a breath-taking one-two punch, carrying you along for the duration of the story. It oozes charisma and panache at every turn, with every nuance polished to a mirror sheen. Transitions between areas are slick as can be, with the main character dropping down from the top of the screen and leaping off to the side.
Loading screens feature your rotating visage with the motif ‘Take Your Time’ as it ironically whittles hours of your life away. The game worlds have an abundance of personality and energy, with the striking contrast of colours always grabbing your eye to the next big thing. 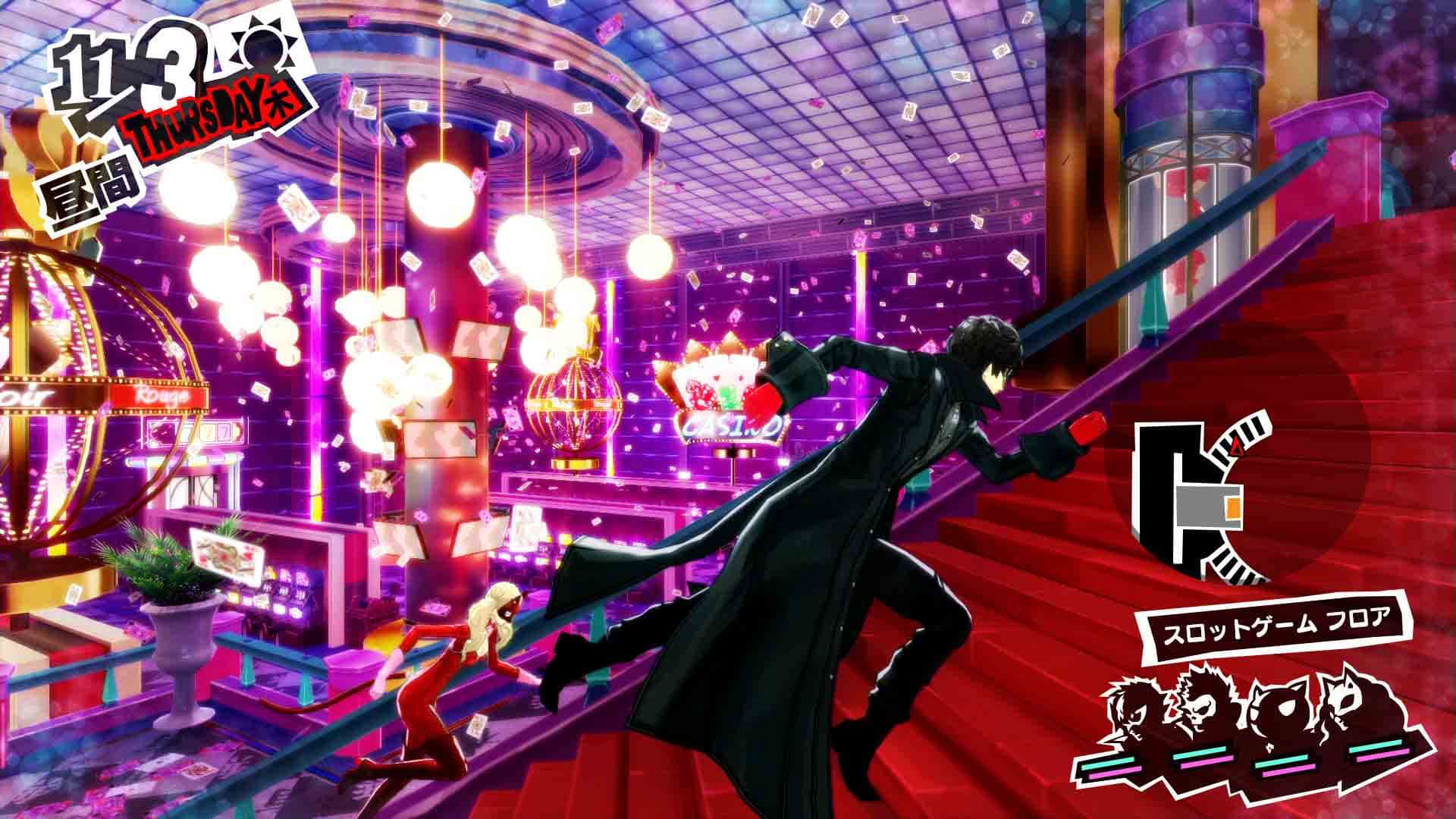 Speaking of the colour, it’s worth nothing the choice of the palette compared to previous games in the series. In the sombre Persona 3, the central colour is blue, a cold and melancholy colour associated with apathy and loss, indicating the thematic importance of accepting and dealing with death.

Conversely,  the prevailing colour in Persona 4 is a bright, vibrant yellow, indicative not only of the P4’s more cheerful and hopeful nature, but also hinting at the more prevalent subject matter of fear and anxiety. P4 is a game about acceptance of who you are in the dark, knowing your faults and becoming stronger for it.

Finally, Persona 5 makes use of red the most. Red is more aggressive than blue or yellow, with connotations of anger and violence, which is apt. While P3 and P4 were about acceptance in different forms, P5 is about not accepting the labels placed on you by society, slaves to an unjust reputation who wish to be emancipated from cruel perceptions. Most of the main characters are outcasts for one reason or another, and so are spurred to fight for their own justice. 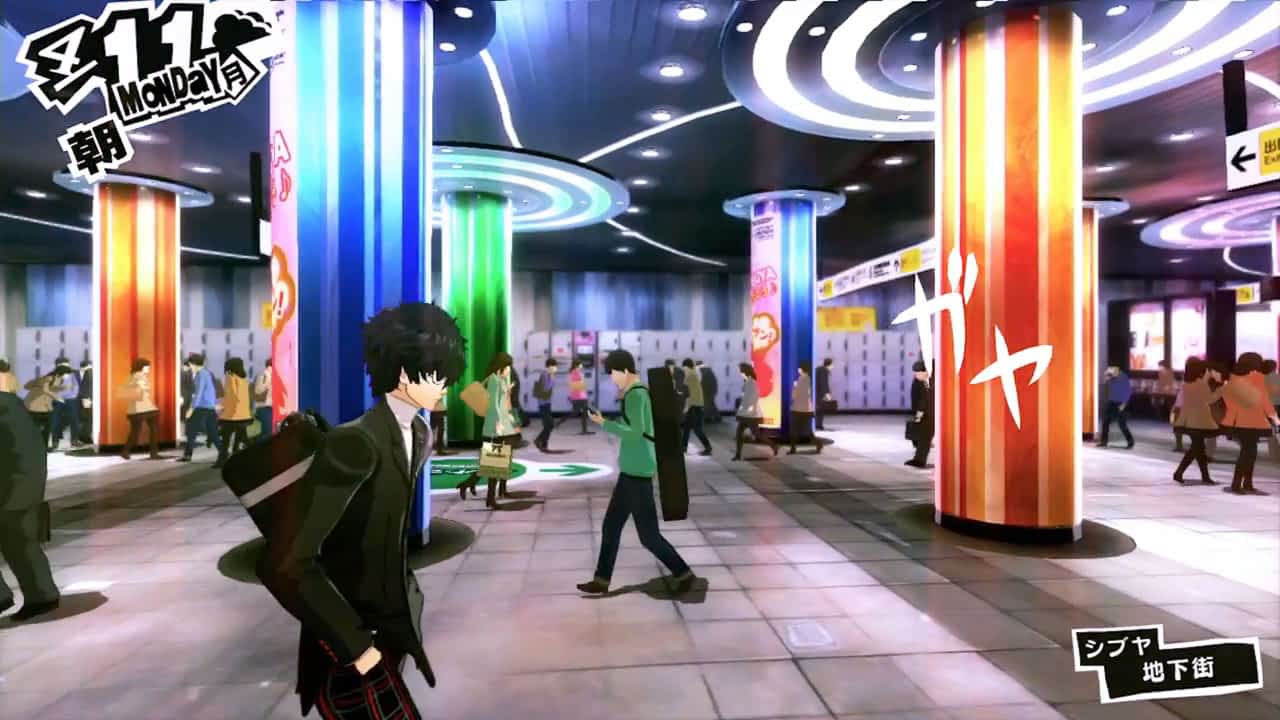 It is this level of charisma and rebel spirit that will keep you hooked on Persona 5. With immaculate writing, peerless art direction, sparkling audio design and an almost overwhelming quantity of sheer things to do, Persona 5 sets the bar for an entire genre.
I feel I’m not even halfway through the story yet, but even so, and considering the high quality of releases of late, P5 makes a strong early case for Game of the Year, if not the best game on the PS4.

Rating: 5/5
Written by Will Whitty