Konami will release its official game of the UEFA EURO 2016 tournament as a physical and digital stand alone edition on April 21st for PlayStation4 and PlayStation3. Existing PES 2016 users on PlayStation4, XboxOne, PlayStation3, Xbox 360, and Windows PC will receive the dedicated UEFA EURO 2016 content as a free DLC on March 24th.

KONAMI secured the official UEFA EURO 2016 license last year, and all such content will be provided as additional content absolutely free to those owning the full PES 2016 game. This year’s competition takes place in France and will see 24 teams gather for initial group matches before progressing to knock-out stages. Qualified teams from all over Europe will compete for the coveted Henri Delaunay Cup, with the first game played on June 10th, and the final taking place in France’s stunning Stade de France a month later on July 10th. During this time, 50 matches will be played, showcasing Europe’s greatest football talent.

KONAMI’s official UEFA EURO 2016 title will be added to PES 2016’s main menu screen and instantly visible on loading the game. The disc-based release will contain both the full PES 2016 game and UEFA EURO 2016 content. The UEFA EURO 2016 mode will feature full iconography and presentation elements from this year’s tournament, and also includes the Stade de France stadium, which hosts the final in July. From the 24 qualified teams that feature real players with hundreds of authentic player faces, 15 fully licensed teams will be included with the latest strips for England, Wales, Germany, Spain, Portugal, Italy, Ukraine, Czech Republic, Croatia, Slovakia, Iceland, Turkey, Albania, Northern Ireland and hosts France, all perfectly recreated. All squads will also be in line with those of the qualifying nations with the various playing styles perfectly replicated via the game’s innovative Player ID and Team ID systems, which mimic the exact playing styles of both individual players and the team as a whole. 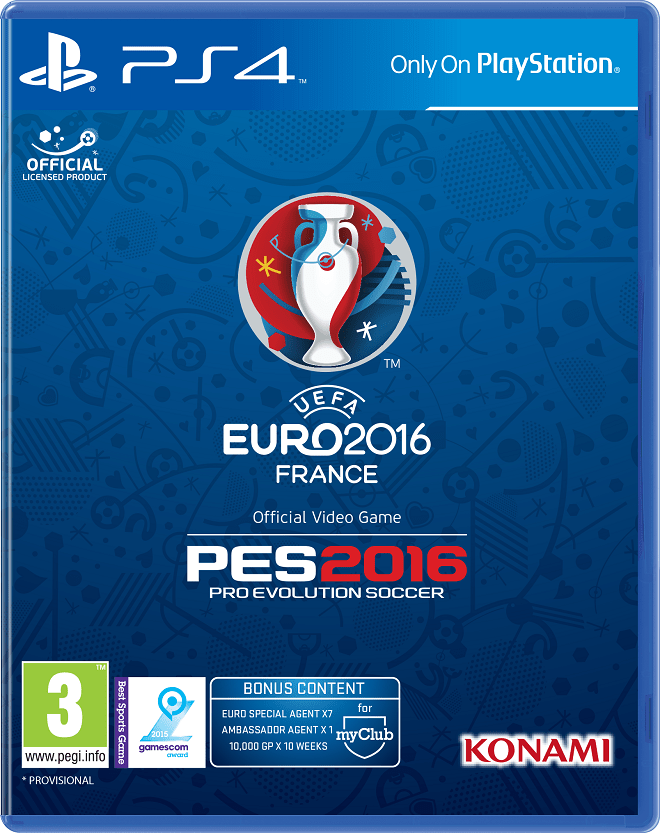 In addition to the central single-player mode, KONAMI will also support the UEFA EURO 2016 content with a series of top-level promotions. The Official PES League will be running online competitions during the duration of the competition, while a series of very special myClub promotions are also planned. myClub is a phenomenally popular option within PES 2016, that allows users to use accrued points or in-game micro-transactions to build a title-winning side and lead them to glory. Running alongside the tournament, KONAMI will release a series of special myClub incentives, including new Euro Special Agents that allow key players that are performing well in the competition to be recruited for use within myClub. Those purchasing the physical copy of the UEFA EURO 2016 title will also receive exclusive myClub rewards, including access to a special Ambassador Agent, seven special Euro agents giving them seven players representing the 24 qualified teams, and 10,000GP each week for 10 weeks.

“All eyes will be on France as Europe’s most prestigious international competition gets underway in June, and we are delighted to present the official game of the UEFA EURO 2016 tournament,” stated Erik Bladinieres, European Brand Director of Football for Konami Digital Entertainment B.V. “With such a high standard of football on show, only the PES series could truly recreate it in all its glory. Our team is committed to building a game that matches the pace, skill and excitement of the competition, and introducing its depth and entertaining gameplay to a new wave of fans. Our existing PES fans are the most enthusiastic and committed of any football title, and we are delighted to be giving them the UEFA EURO 2016 content absolutely free, while our accompanying online and myClub promotions will ensure this will be a summer of football to remember.”

KONAMI has also confirmed that its agreement with UEFA extends across its portfolio of football titles. The publisher will be creating bespoke UEFA EURO 2016 content for its PES Club Manager  and PES Collection titles for iOS and Android, full details for which will be released shortly.

The final packshot and coverstar for the physical stand alone edition for PlayStation®4 and PlayStation®3 will be revealed in the weeks ahead.