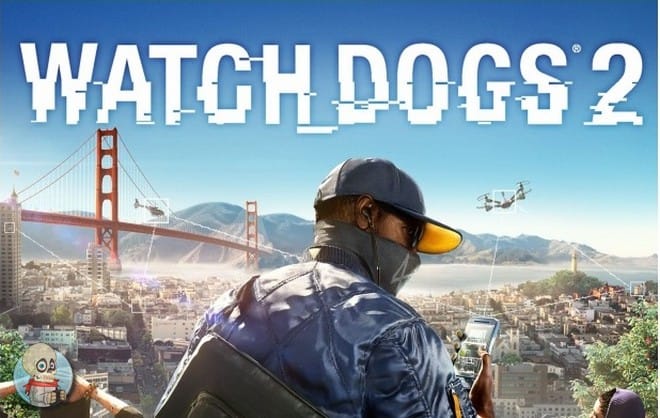 Q. Dedsec plays a central role in the game. Who are the other notorious members of the group?

A: Dedsec is full of extraordinary individuals. Three of its members will have key roles in Watch Dogs 2 Wrench As the group’s self-proclaimed anarchist, Wrench excels at breaking things: the law, the system, or anything vulnerable to a sledge hammer. The Wrench hides his face behind a bizarre electronic mask, his emotions expressed only through digital emoticons and a distorted voice. He may be vulgar and crude, but he’s always entertaining. He’s also an absolute adrenaline junkie. Sitara The closest thing Dedsec has to a leader, Sitara’s focused on their public face. Her propaganda videos and rebellious art style have put the group on the map and she is easily the most politically motivated member. Sitara’s taken full advantage of the education system, focusing on marketing, PR, and just about everything related to art. Hoping for a change, she relocated from LA, but found hollow celebrities replaced by soulless tech giants. She believes culture is being crushed by cold industry, which creates the perfect opportunity for her brand of artistic rebellion. Josh Josh is Dedsec’s strongest programmer as well as the group’s biggest activist, preferring to view things through a positive lens and assuming the best in people. While some might call him naïve, he’s a much needed counterbalance for Dedsec’s wilder elements. Despite his drive to help people, Josh comes across as antisocial and distant. He finds his rare comfort behind a keyboard, digging through code, spotting patterns in social media, or solving complex cryptography. He was a perfect candidate for Dedsec’s meritocracy of skilled social misfits and they were ecstatic when he agreed to join them.

Q. What where the main inspirations behind Dedsec’s visual identity?

A: Inspirations were drawn from pop culture & internet’s sub cultures. In WATCH_DOGS 2, DEDSEC’s imagery is mixing the classic horror pulp genre with visual archetypes from some online underground art scenes. The main goal was to have an aesthetic that represent the hacker culture in a playful way while retaining a rebellious & cryptic signature. 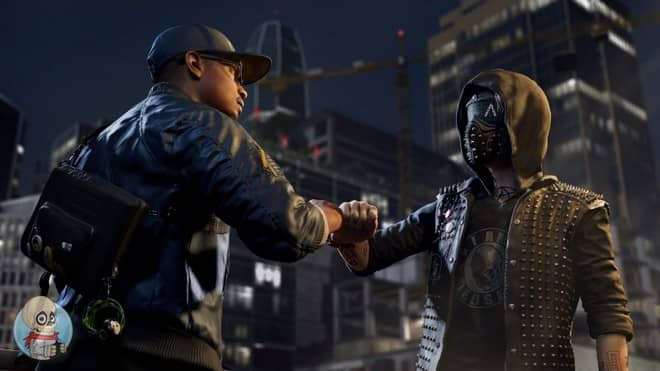 Q. Dedsec is rewarded with Followers each time you succeed in a mission. How does Dedsec’s Social Media audience work? Does it improve the group in any way? Answered by Danny Belanger, Game Director

A: Gaining Followers is the central goal of the whole game. Having more followers essentially allows more power to be used to Hack. Ever follower is assisting by giving a little bit of “Botnets” which can be seen as the equivalent of firepower. With Followers, the player and Dedsec gains more Hacking abilities. The player can then decide which Hack he wants to unlock for the group. Also, more Operations (stories) will be uncovered as Dedsec gains followers, it allows them more power to dig deeper and reveal hidden secrets.

Q. What are the unique tools Marcus has at his disposal ?

A: His phone is quite similar to what we have in our lives and the player will have many Apps that he can purchase in the App Shop™. With our phone you can take pictures or selfies, contact friends, or partake in activities such as Sailling, E-Karting or doing taxi-like activities. Marcus will also use his phone to hack people. Everyone can be hacked in WATCH_DOGS 2, and this is a very important improvement to the game. This allows the player to be more creative and select which hack he can do on any AI. You can distract an AI, fake profiles to send the Police, trigger gang wars or find anyone’s secrets hidden in their data. The situations that can arise out of this are incredibly, rich allowing players to use the systems to create unpredictable gameplay. Marcus also has two remote-control devices. The Jumper will stay on the ground, while the Drone had the capacity to fly. These are both an extension of Marcus’ Hacking abilities and he can project himself, using these devices, to explore layouts and cause all sorts of havoc in the city. Also, the Jumper has many abilities similar to Marcus since it can distract AI and interact. Marcus has a special homemade weapon, we like to call the Thunderball. It’s made from a billiard ball that is threaded onto a lanyard made from 550 paracord. The weapon looks rather inconspicuous until Marcus starts swinging it in wide arcs, and at that speed the Thunderball can knock someone out cold in a single blow. To craft this weapon Marcus would have had to do some research, and after an afternoon of watching videos and reading various self-defence blogs, Marcus has crafted a very interesting new weapon. In typical Hacker style, Marcus can see how to take different objects and combine them into something new. Marcus shows his natural prowess for movement and combat when he swings the Thunderball in devastating arcs, combining raw force and poetic movement. Finally, Marcus can also 3D print and wield a wide variety of weapons to suit his playstyle. From the non-lethal taser, to the powerful grenade launcher, every player will find a weapon to suit their taste and mood. 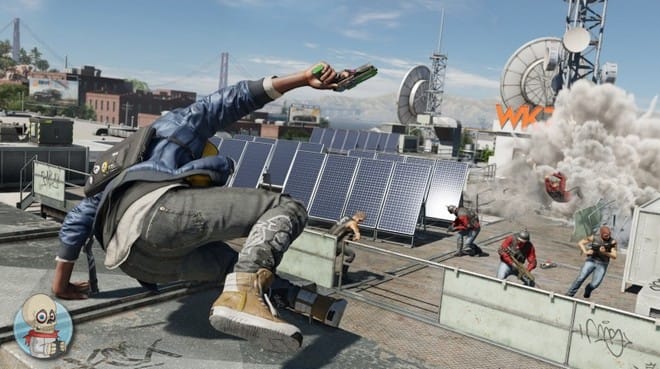 Q. So you guys said at the reveal that Marcus was accused of a crime he did not commit. What is this crime?

A: . Marcus was identified by crime prediction software as being responsible for a nearby hightech burglary that required the technical expertise he possessed. The evidence fit him, he had no alibi, and the crime prediction was the nail in the coffin that allowed the cops to press charges and close another case. It was only because of a sympathetic judge that Marcus escaped a harsh sentence, but the damage was done… Marcus had a record. He was flagged.

Q. How has the driving changed from WD1?

A: We have completely changed the driving engine to make it more accessible to players while keeping the depth we want between the vehicle types. We are using Ubisoft’s Reflections technology and working closely with them to profit from their great experience in the genre.

Q. Does the game offer character customization? What can be customized?

A: Absolutely, the main character can be fully customized. All the different clothing parts can be changed, from the shoes to the hat, and each player will have a unique look. 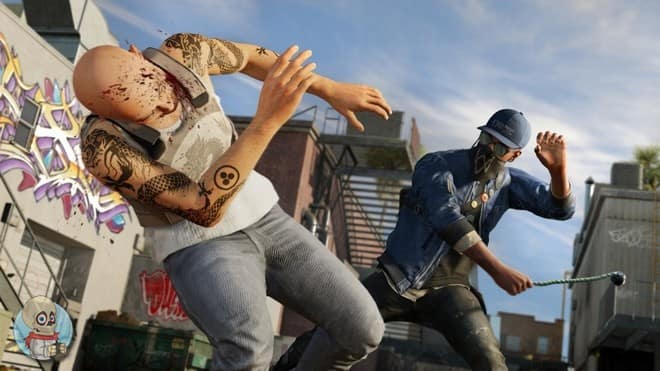 Q. Can you run me through the demo that was shown during the E3 Ubi conference?

A: In Watch_dogs 2 you play as Marcus Holloway, a brilliant hacker within the technology hub of the San Francisco Bay Area. Marcus, along with other likeminded hackers from a group known as DedSec, have promised to expose a corrupt senator who is working with a Social Media giant to control and engineer his votes. We show off Marcus’ improved hacking abilities, showing that now everything is more connected than ever, controlling any vehicle you see and unleashing mass hacks to distract large crowds via their mobile devices. Desecs “crazy punk” Wrench points Marcus to the senators elaborate skyscraper Penthouse where he uses his tech-toys to infiltrate an offline data store, scouting ahead with the new Quadcopter Drone coupled with Net Hack, a detailed view of the local network’s exploitable devices. After deploying hacking tools using the robot arm of his RC Car to strip the Senator of all his private data, Marcus jumps and rolls his way to an elaborate exit (thanks to wrench) while under fire and hacking everything he can to provide cover. But not before leaving the Senator a final surprise. We showed what’s at the heart of WATCH_DOGS 2, Marcus has more control, more power and a lot more attitude breaking the digital leashes of corporate control over society.

Q. How do you start the missions? Can you play them in any order? How customizable will the experience be?

A: Globally, the Operations can be done in any order. Many of them can be found by exploring the world so each player’s experience will be different. There are some key Narrative moments that we want the player to live that will unlock new Operations and create Narrative continuity, but these are exceptions. We want the player to feel a lot of freedom in the way he chooses to play the game.

Q. How does the online component work in WATCH_DOGS 2?

A: The online component of WATCH_DOGS 2 is seamlessly integrated with the single player experience. The player will meet other friendly Dedsec hackers while exploring the city and participating in optional Dedsec Events. This occurs without a loading screen or matchmaking request. The game does this quietly, under the hood and pushes you opportunities when they’re nearby. If the player chooses to team up with another player he can play Cooperative missions located throughout the San Francisco Bay Area. You’ll also be presented with Online Hacking opportunities in the world, which has received improvements from the first WD game. With the introduction of new hacking tools such as Vehicle Hacking and the RC Flying Drone, you now have more ways of manipulating the environment as either a Hacker or potential Victim. This breathes new life into the returning PVP activity. 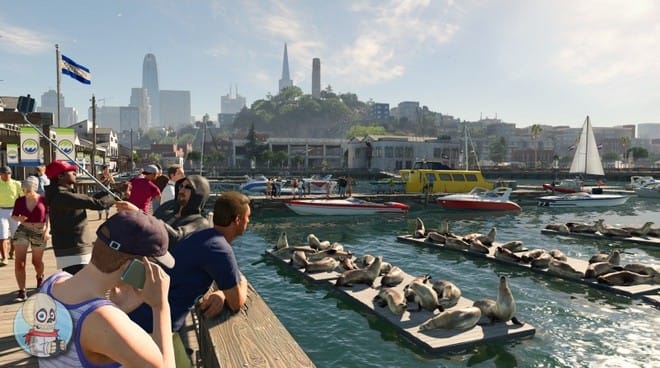 Q. Can I play the entire game in coop?

A: When a player is teamed up with another player he can play Co-op missions, participate in Dedsec Events throughout the city, help one another completing free-roaming operations and explore the world to collect rewards. The player can even participate in Player-versus-Player activities while in co-op. While the online experience is part of the core game, some missions and activities must be played solo.

Q. How many players can join a coop session simultaneously?

A: Players can team up with one other player for co-op.

Q. What’s the difference between the Coop and the PVP experience?

A: In both the COOP and PVP experience, activities will be proposed to you as you are playing the game. These activities are entirely optional. In the COOP experience, you’re working with another Dedsec member to collaboratively complete an event or mission. Teamwork is encouraged between the two players. In the PVP experience, other players acting as rival hacker groups – are directly competing against you.

A: Your visual identity when playing online is entirely controlled by you. While you will always see your avatar as Marcus, other players will see your avatar with a different face. This is something you can either set manually or have as a randomized option. Your online avatar will also wear whatever clothing you’ve chosen for Marcus.