After a car accident, Michelle (Winstead) awakens in a bunker with two men named Howard (Goodman) and Emmett (Gallagher Jr). Howard informs her that there has been an attack on the United States; the land and air above is uninhabitable, and everyone she knew is surely dead.
Howard plans to remain in the bunker until he thinks it’s safe, but Michelle resolves to escape the bunker’s safety and reach the outside world.

Its remarkable how much of a JJ Abrams production this is.

Not in a Star Trek or Super 8 way, where motion blur, canted angles and lens flare dominate the visual style. After all, he worked on this film in a production capacity rather than as a director.
Instead, 10 Cloverfield Lane takes its cues from his other work, most notably Lost. Indeed, several elements of the early seasons of Lost come into play here, most notably a sealed underground building (the hatch in Lost vs. the bunker here), a seemingly amiable man who claims to be non-threatening but remains suspicious (Ben in Lost, Howard here), and a general sense of ‘What the hell is going on?!’

And what is going on indeed. Following on from the original Cloverfield, I expected this film to be more horror than anything. And indeed, there are some clever jump scares and scenes that leave you with a growing dread as they progress.
That said, the occasional scare notwithstanding, this is a thriller with tension so thick it could line the bunkers walls for extra safety. What it is not, however, is a sequel, or even a prequel. This is a spiritual successor to the first Cloverfield, a scenario you could possibly imagine running parallel to the events in New York (which suits me just fine, as a big fan of the original). 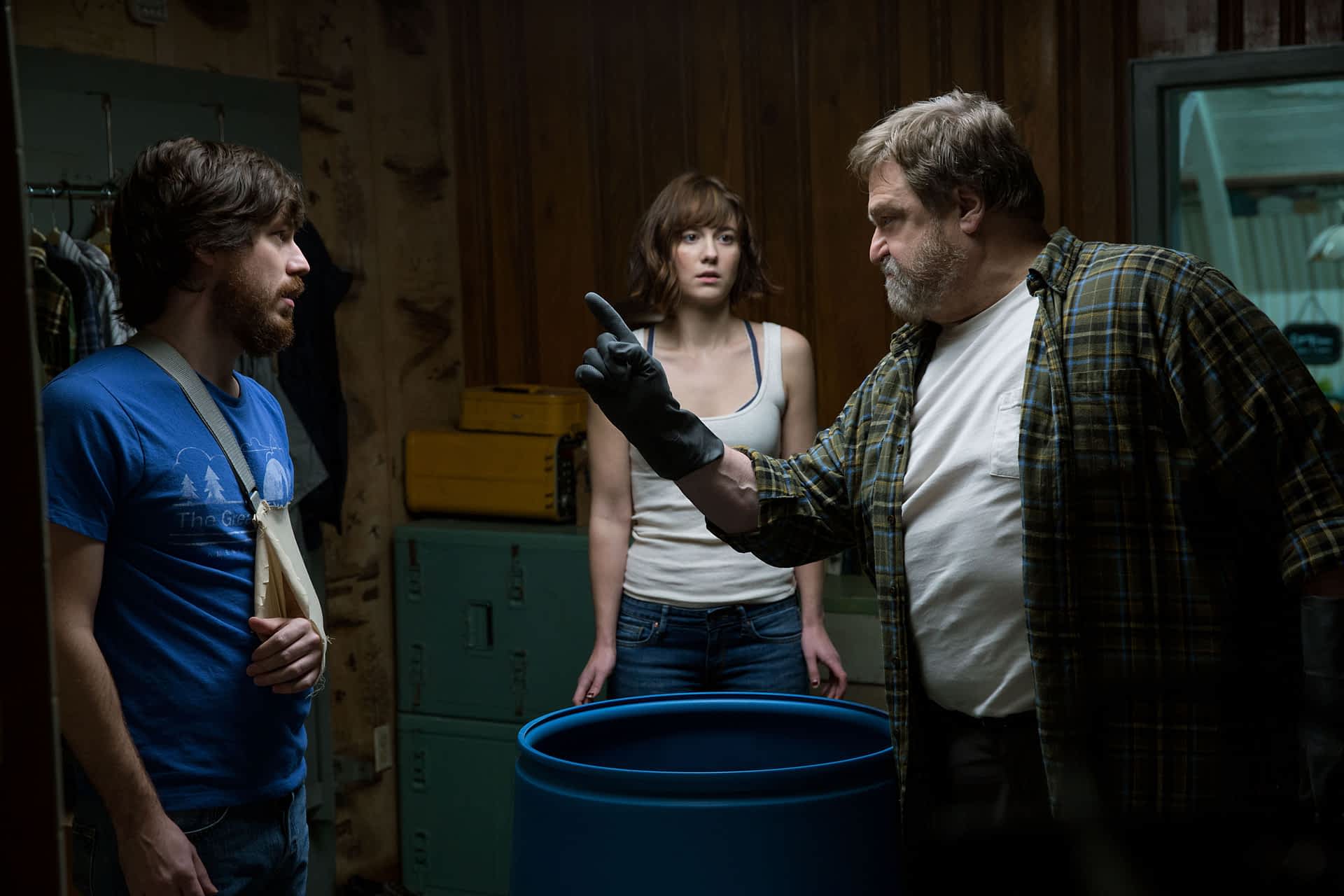 After an opening scene where Michelle packs up her belongings and leaves her apartment, we quickly move along to the meat of the film. Michelle’s car is hit by another vehicle, and she wakes up injured and chained to a wall in an underground bunker.
We are soon introduced to Howard; a former military satellite expert and the owner of the bunker, and Emmet; a local man with his arm in a sling that Howard had employed to help build the bunker.

The setting gives a claustrophobic air to the film, as Michelle tries to figure out what is going on both outside, and more intriguingly, inside Howard’s doomsday shelter. Subtle hints are scattered throughout the first act of the film, constantly making you reassess the situation. Has Michelle been abducted by a crazy man as it seems, or are his claims to be her saviour from a countrywide attack genuine?

Of course, there are only so many ways this sort of story can end. Buried, the 2010 film starring Ryan Reynolds as a man who has been… buried alive (how shocking), can only have one of two endings; he escapes or he dies (and of course, the ending appears to be one before violently swerving towards the other option).
So how can 10 Cloverfield Lane avoid that same issue? By reaching one of the obvious conclusions early, and using it to add uncertainty and intrigue. At this point, the film becomes a great deal more interesting and tense, because you no longer have any idea what to expect.

Like any film with a small cast, 10 Cloverfield Lane is only as good as the performances of its actors. Luckily, the performances in this film ranges from great to simply excellent. Winstead, good in poor films such as The Thing and great in good films such as Scott Pilgrim vs. The World, is elevated to ‘wonderful’ here. She avoids the Final Girl clichés we expect in horror and remains believable throughout. Hers is a character determined to survive a situation that would break someone weaker, all the while remaining very likable, a character you can easily root for.

Gallagher Jr., a relative unknown compared to the other two, starts off as a stereotypical, small-town USA ‘nice but slightly dumb’ kind of guy. However, he does get enough moments to put in a good performance, though he is definitely the weakest of the three. He doesn’t get as much to work with, which is a writing issue, but he does as well as can be expected with what he has. 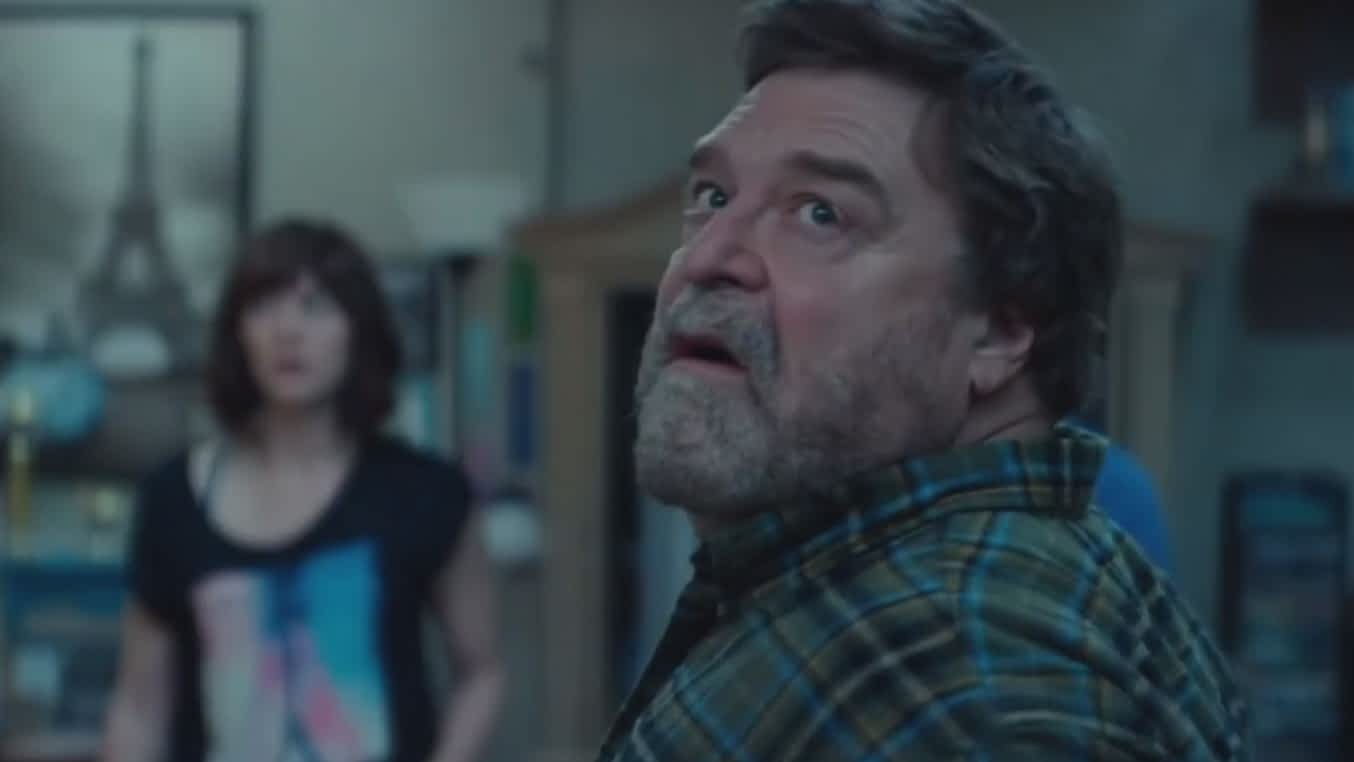 That being said, the star of the show is John Goodman. Over the last few years, Goodman has been on the run of his career, pulling out great performances in every film he’s been in.
This is one of the best performances of the lot, as the conspiracy nut, former military who, whether his actions are right or wrong, just seems slightly off. His size gives him presence, imposing on the others in every dimension, and everything he does is just slightly too intense to leave you feeling comfortable. Little nuances like playing with his keys become almost oppressive, while the bits and pieces you learn about his family, specifically his daughter, can either humanise or demonise him based on how you perceive his character.

He appears very much in control, clever, and even though you’re not always sure if his intentions are insidious or not, you find yourself wondering how could you escape from him if your suspicions are true.
You don’t always know if he’s a villain. He certainly doesn’t believe that he is. But if that is the case, it’s difficult to imagine him being beaten. 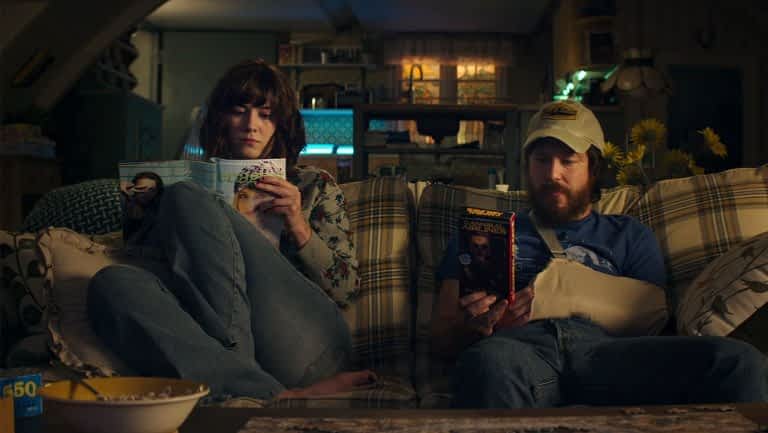 While the acting is the film’s strong point, that isn’t to say it drops the ball in other areas. It’s well written, with very strong set and sound design. There is just enough humour to alleviate the tension, but not so much as to dispel it. The editing is superb as well. It comes in at 103 minutes, notably shorter than your average blockbuster, and there’s barely a wasted second to be seen. Almost everything that made the final cut needed to be there, and because of it the film is sharp, well-paced, and doesn’t outstay it welcome. Mainly.

The ending lets the film down somewhat. This is not to say that it’s bad, not by a long shot. The issue with it is that the tension and high emotions reach a tangible peak…and then drops somewhat for the last 10 minutes. We end up reaching a conclusion that could have been empowering or uplifting but instead, it falls slightly short. Without spoiling anything, the film loses its strong focus in lieu of making a point. And while it is an interesting point, the film suffers very mildly for it.

Ending aside, this is a very good film. Well made, with great performances, it is a model example of maximization of what’s available to you. There’s no waste on-screen here, and the result is a tense film you’ll want to revisit and tell your friends about.

Score: 4/5
Written by Will Whitty