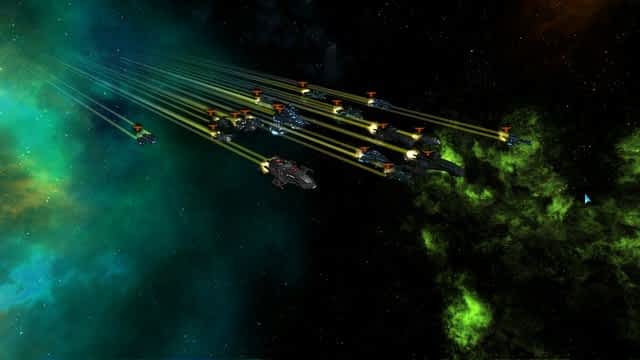 It is terribly lazy to simply compare two titles when trying to describe a new game rather than taking it on its own merits, but it is hard to play Praxia Entertainments’ first release and not feel the influence of FTL in terms of ascetic, atmosphere and addictiveness (whether that was intentional or not). However Beyond Sol offers much more when it comes to gameplay and space politics.

Not wanting to make my life easy Beyond Sol doesn’t fit nicely into any one easily defined box. It is on the face of it a Space Exploration game, but it also has large elements of city building, resource management, resource gathering, and galactic diplomacy and combat. You spend a lot of time working on each individual element which keeps the overall experience from getting stale and keeps you from getting to bed at a reasonable hour.

The dev team describes it as “Beyond Sol is a multiplayer, open world PC game set in the distant future when humanity has developed into a young galactic space-faring civilization. As a ship captain, you will establish a city in a newly colonized and virtually lawless outlying system on the Rim. With the aid of massive fleets, you will compete against other cities for dominance of the solar system using combat or cunning diplomacy” 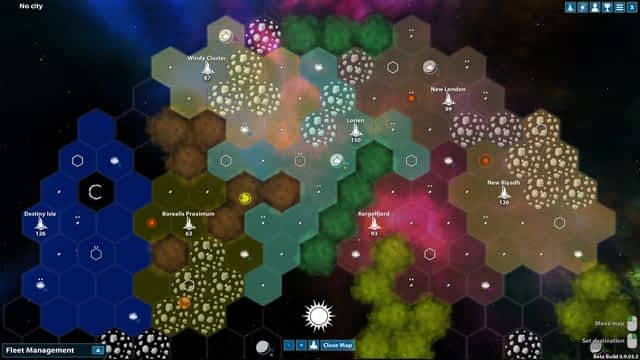 The outset can be daunting and a little confusing as you set off into the wild empty reaches of space to establish your city. First open the map by pressing “M”, pick a nice quiet empty location (to avoid early conflicts), ensure it has a nice bit of “space” to grow your city into and that there are plenty of nearby resource options. Then “Right Click” to set the location hit “J” to power up the engines and fast travel to the spot and set up shop.

Now that you have a city base established you need to start gathering resources, at first this is done manually. Think of yourself as a kind of space scrap-merchant flying around collecting anything valuable and bringing it back home to sell on the open market. This “active resource gathering” is the bulk of what you do early on to get established. While it might sound dull it is surprisingly cathartic, and while the returns are normally low the excitement of stumbling on the mother-load of floating debris is palpable.

To start making serious cash you need a static mining operations, on the map you will see large asteroids that are far too big for your salvage drones to harvest anything from. They require massive drilling rigs that hover above them to extract the precious minerals inside. Once this rig is built this establishes your “passive resource gathering” and it will work away in the background and automatically start depositing resources to your storage facility back at base.

All the resources gathered can be used for either base building or they can also be sold. Here is another little “mini game” to mess around with. As the economy fluctuates and resources become more readily available or super rare the prices rise and fall. You can make a healthy living from buying low and selling high. If you have enough storage to keep a decent stock pile this can become another addictive little past time. 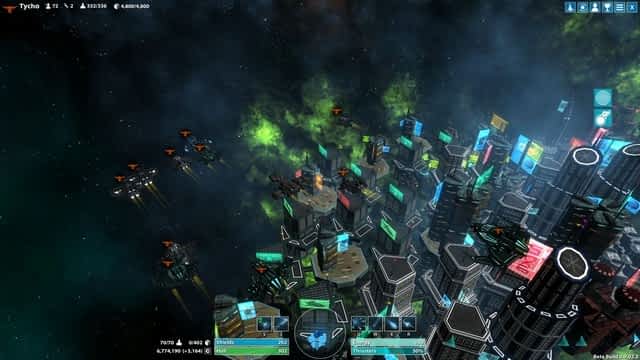 As you build your city and expand its reach you need to maintain its economy. This is pretty simple at the start. Commercial areas generate the most income for you. You need power and people to run these zones, so you need power stations and residential buildings to look after that aspect too. What you need to closely manage is that ratio Income, Power, People. Not having enough power or people harms your income, if the ratio gets bad enough it can throw your budget into the red and start to cost you money which impacts your ability to built or upgrade your city or fleet.

You start as a captain of one ship but you will need a fleet of ships for protection and for carrying out offensive maneuvers. You will first need to establish the three corporations that supply the weapons and tech required. These corporations like the other buildings can be upgraded to unlock better options, better weapons, better ships.

Of course there is the option of diplomacy should you be the peace loving space explorer. That’s right you are not alone in space, there are other cities popping up and expanding all around you. These relationships need to be managed closely. Tensions rise as the areas start to encroach on each other but with some careful planning, gifts and shows of might, you can avoid major conflicts. 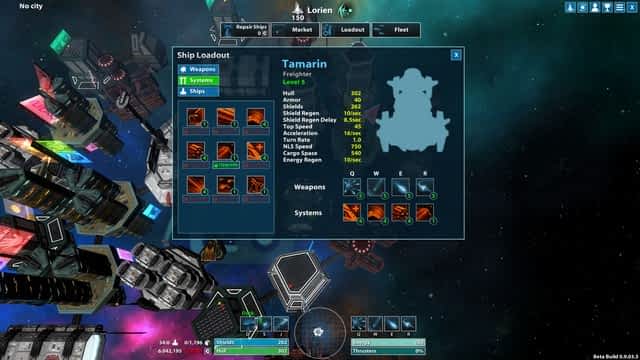 Conflicts are handled in real time space battles, the most common encounter early on is with space pirates. They will start to attack unguarded city locations, mining operations, passing traders, or even your ship out collecting its bits and bobs. This can take a bit of getting use to as the controls are basically throttle up and right click on the spot on screen to turn the ship. Getting in the right spot to launch an attack against a fast nippy pirate ship is something that takes time to master. But again like so much of this game investing the time to explore your options is so rewarding.

I guess what I’m trying to say is the the game has depth and it hugely rewarding if you get over the initial jarring hump. This hump is hugely concerning for a studio’s first game. The Steam Greenlight market is already oversaturated and rapidly losing the confidence of the consumers, so it is essential that when you have a great game that it doesn’t fall in the first hour of gameplay. The onboarding process needs a bit of work, it doesn’t need to hold your hand but could do a better job of explaining just what you are supposed to be doing so players don’t quit out of frustration or boredom before they get a chance to experience its brilliance. 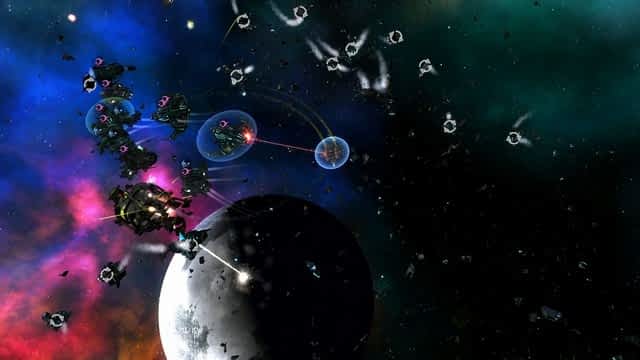 We really want you to play and enjoy Beyond Sol so here are a few basic tips for those about to embark on their first space adventure.

Overall: As you might expect I loved Beyond Sol, I still love it! It is old school science fiction exploration. There is nothing flashy on the face of it (although I do like this aesthetic) the game reveals itself in the layers and layers of different engaging elements that can be enjoyed both in single player and multiplayer. I feel like I am somehow underselling the game as there is so much more I’ve not touched on but this review is already getting long in the tooth.

I was expecting a fun little time killer that I would play for an afternoon and forget about, but what I found was a game that was really relaxing to play, highly engaging, and super addictive. When you promise yourself “five more minutes” to get the money together to build a new store, and it turns into a 4am trip to the local asteroid field for uranium purely because the price just sky rocketed and you could make a killing on the markets, you know you have a good game on your hands, or a weird uranium addiction.

A better onboarding process would ensure that first hour or two of gameplay doesn’t lose players but helps bring them along without being overly intrusive. From looking at the update and change logs the team are still taking feedback and making changes so expect a lot of further improvements in the future.