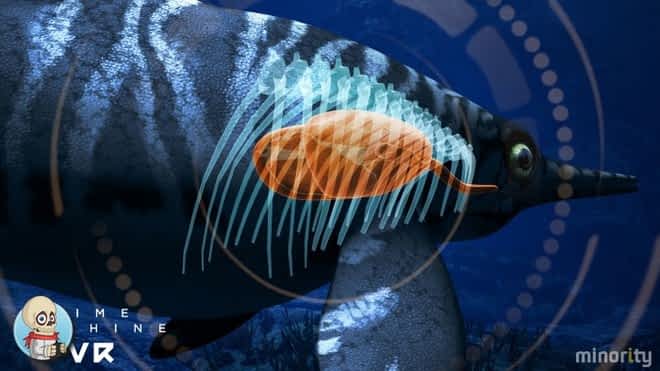 “VR is the only way to make this game,” said Minority CEO Vander Caballero. “We’ve spent three years re-creating prehistoric creatures and the oceans they lived in… and their sheer scale in VR is heart-stopping. A livyatan on a flatscreen TV is cool to look at; a VR livyatan twenty times your size with a mouth so big you can stand comfortably in it is out of this world.”

In the role of an adventurous time-hopping cadet, players will be tasked with traveling to the Jurassic era to gather data on the ancient titans that roamed those oceans. This mission takes a dire turn when rising temperatures in the present free a deadly virus from the ice caps where it had lain dormant for millions of years. To prevent the extinction of the human race, the player must delve deeper into the past, seeking a cure among the marine monsters who survived the plague when it first emerged.

Watch the launch teaser to get a glimpse of the adventures that await in our planet’s past:

One of the first made-for-VR titles to hit Steam Early Access in 2015, Time Machine VR plunges players into the depths of prehistory, where they can use the Vive’s motion controls or the Rift’s gamepad to navigate the sometimes frightening, always awe-inspiring oceans of early Earth. To complete their mission, players will have a host of hi-tech tools at their disposal: the ability to freeze time, to bait dinosaurs and manipulate situations to their advantage, and to take live snapshots of dinosaurs in action at the push of a button.