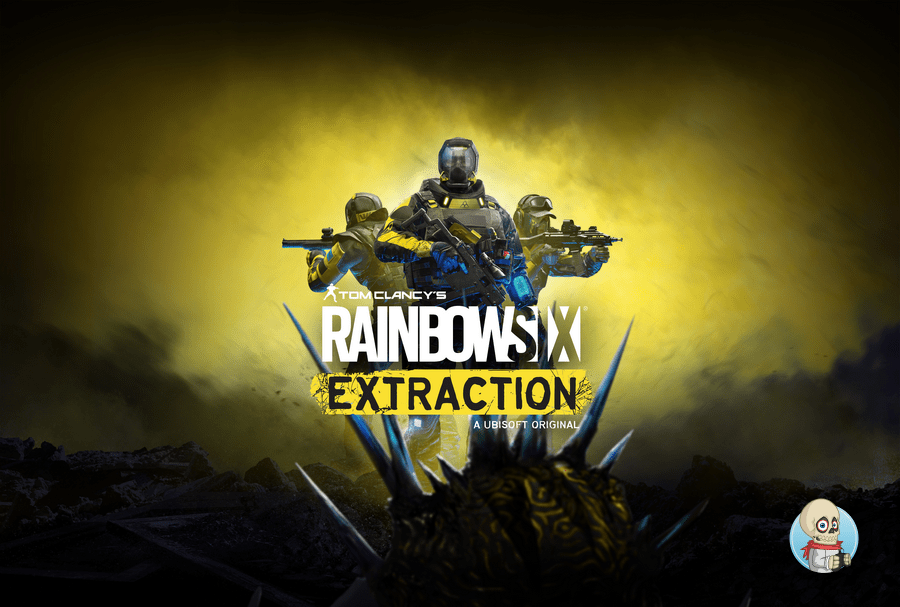 My initial excursion into Rainbow Six: Extraction was an intense adrenaline-pumping experience. The tight dark corridors, the lurking enemies, the tension of knowing that everything could go sideways very quickly. That one wrong turn or missed shot could have the enemy overwhelming me in seconds.

This tension is ratcheted up by the constant fear of knowing that you will lose everything you have earned if you fail to extract.

If you have been in the final heart-pumping moments of a Battle Royal. Then you will understand that intense pressure and the wave of relief that washes over you as you make it out safely.

Rainbow Six: Extraction delivers this feeling in much smaller doses. But it does it so much more often, making the gameplay loop very addictive.

In 2018 Ubisoft ran a limited-time event inside Rainbow Six: Siege called “Outbreak”. In this event, a mysterious meteor landed in New Mexico. A few days later the whole landscape was infected with giant spikes sticking out of the ground and people turned to “Zombies/Aliens”.

Extraction was born from that event. As we flash forward to today, the same outbreak has popped up across other locations on US soil.

New York, Alaska, and San Fransico have all been hit, and it is up to your “REACT” team to figure out what is going on.

Extraction is an online-only, 3 players PVE Co-Op tactical shooter, where gathering intelligence is as important as getting kills.

While it is a stand-alone experience, I don’t feel like it would be unfair to describe it as an expansion pack.

It is light on story and does little to develop the already established characters. It only has one online mode, but in fairness, that mode does have a lot of content and replayability.

Perhaps this explains the choice to launch at a lower than usual price point of just €49.99. There is also a generous Buddy Pass system (that lets two of your friends play for free for 14 days), and the day one Game Pass launch to help keep the population healthy.

The game plays really well. It looks good and there is a nice weight to it. The gunplay and character movement is nice and solid and there is a lot of freedom in how you can approach each playthrough.

Although Extraction can be played solo or in a team of two. It is better in teams of three where communication is good and the Operators work well together.

Working as a team is essential. As is learning about all the different unique skills and weaknesses of each Operator and how their speed, armour, weapons and gadgets suit each situation.

Figuring out which Operators work together to complement each other, and your playstyle is half the fun.

The gameplay loop is pretty simple. Your team is dropped into a map at a random location. Each map is separated by airlocks into three zones. Each one of these zone has a randomly spawned objective, and some randomly spawns different enemy types into different locations. This ensures that every time you drop into a map things are a little bit different.

As you move through an Airlock you are no longer able to go back. Each zone gets progressively more difficult. The further you go the harder it gets, the bigger the risk but also the greater the reward.

Each zone also has its own Extraction pad that you can get to if things get out of hand. If you don’t extract you will not only lose all the XP earned but you could also lose your Operator. With Health and Ammo being in limited supply. You, and your team, need to be constantly aware of your mission, the surroundings and your available resources.

Sometimes it is better to just extract with nothing than risk losing an Operator. If an Operator dies they go MIA, and you can’t select them again until you mount a rescue mission. If you fail that rescue missing the MIA Operator loses 30% of their XP/Rank which can affect your unlocks.

What’s on the disk:

The game releases with a decent amount of content, as we used to say, “on the disk”. Including 12 maps, 18 Operators and at least 10 enemy types. When you first boot up the game you will notice that not everything is available right away. You will be starting with four maps and nine Operators, but it doesn’t take long to start unlocking the rest through progression.

The main overall rank to progress is your Milestone Rank. Getting Kills, completing Objectives and Studies, earns you XP. Provided you successfully extract and bank that XP it will increase your Milestone rank. Milestone Rank progression unlocks new maps, tech and Operators. By the time you are at Rank 7, which is a few hours of gameplay, you will have 8 new maps, 3 new Operators and 8 new pieces of tech.

Studies are small challenges, for example, getting five headshots or tagging five nests. They are pretty easy to complete and they really help speed up progression. There may be a tendency to veer towards some selfish play to collect these, but I’ve also found the opposite. It offers more opportunities for collaboration. If your partner is looking for 5 nests and you have a recon scanner that can mark them, then you can really help them out.

To get you playing with all the Operators, Ubisoft has a good system in place that ensures you must rotate through the full roster. Injuries carry from mission to mission, if an Operator’s health drops too low, they are “out of action”. If they die (go “MIA”) they can’t be used until they are rescued. Each successful mission also earns HP (Health Points) the more XP you earn the more HP you are given. This is automatically shared among the injured Operators. But a bad run of injuries can deplete your roster for 3 or 4 rounds.

As mentioned earlier, this is not a “full game” with a long story-driven campaign or loads of different multiplayer modes. It is one mode, but it is a mode with a fun gameplay loop, that is very replayable, and has enough content to keep you engaged for a while.

Because the objective, the enemy type and location, as well as where you drop into the map is randomised. You never really know what you will get. This does help extend things but don’t think this is infinite. While no two runs will “technically” be the same. You will start to feel a bit of repetitiveness creep in once you have done the same objective ten times, no matter which room the enemies are spawning in.

The short 5-20 minute Gameplay loop is fun. It is long enough to be rewarding, but short enough to make it easy to hop in and out off.

While you can technically play it solo, this really is a co-op experience. You can play with friends or party up online with randomers. But as with all online games, it is nearly always better with friends.

There is a lot to learn. You need to figure out the maps, the operators, and the enemy. But once you start to get to grips with who does what, and what operators work well together in certain scenarios, there can be some great stand out team moments.

Rainbow Six launches at a reasonable €49.99. That’s an interesting price point considering some Gen 5 games are now hitting up to €80.

It also comes with a Buddy Pass (if you own it you can invite two friends to play with you for free for 14 days once they have the trial downloaded) and if you have Game Pass, it is a day one release.

So, while this may be classed as just a spin-off, and never feels like its own full game. The price point reflects this. The generous buddy pass and the amount of content and replayability on offer still make it a decent offering as it stands.

You also have to consider the history of R6:Siege and how much support the studio have given that game for years after release. They started slow and went from strength to strength with updates and player engagement.

So while Extraction is a little limited today, I feel there are legs on this one yet.