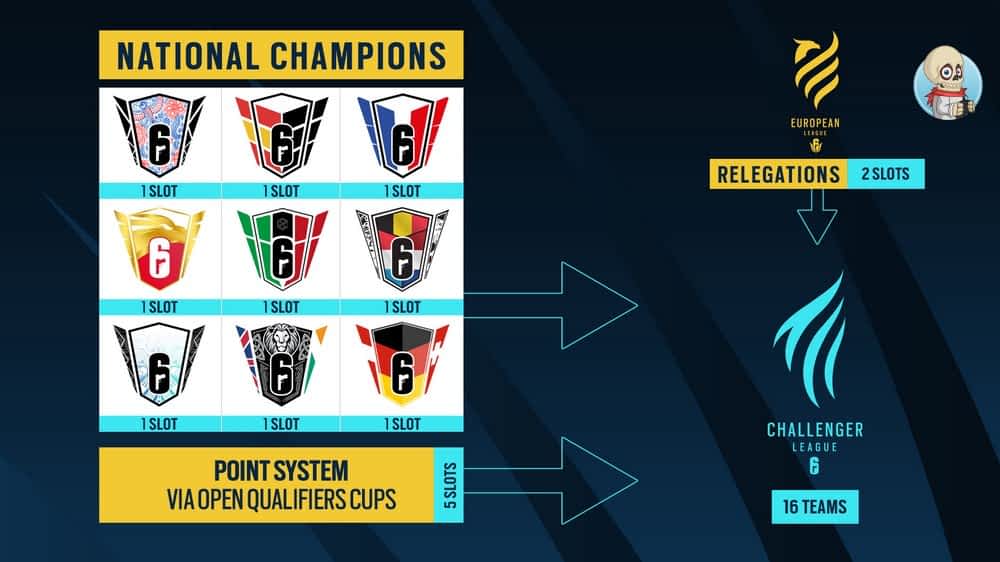 In Crimson Heist, players will discover a brand-new attacker equipped with an original gadget called the RCE – Ratero Charge, Flores can deploy a remote-controlled explosive device at his feet and drive it through the map during a limited period of time. At the end of the timer (or earlier if Flores chooses to), the device will arm itself, become bulletproof, and start a short fuse timer, at the end of which it detonates in a powerful explosion. Flores is armed with an AR33 or a SR-25 as a primary weapon, and a GSH-18 as a secondary weapon.

In addition to this new operator, players will have access to a reimagined Border map, which has been newly reworked with interior balcony connecting east staircase to break room. The bathroom has also been extended to be connected to the tellers. Players will play in a new challenging environment with some entry blocked, a reduced number of destructible walls and an additional outside staircase.

With this new season comes a new secondary gadget, the “Gonne-6”. This new weapon will do little damage to soft walls and Operators. The Gonne-6 should fight the torments of the “20 second meta” and the defense favoured meta present in the Year 5. Besides, additional updates presented in the Future of Siege will be implemented in Crimson Heist Test Server to get feedback from players: Match Replay Beta and Streamer Mode.

Players will also have the pleasure to discover a new Elite skin for Kali: Masterframe Prototype coming on 22nd February.

The Test Server for Crimson Heist will go live on 22nd February. The Test Server is an alternative version of Tom Clancy’s Rainbow Six Siege, allowing players to test upcoming gameplay features that will make their way into the main game itself. Since this is a testing environment, a consistent gameplay experience is not guaranteed on the Test Server. Players are invited to submit the issues they encounter on the Test Server on the R6 Fix platform: here.

Ubisoft has unveiled the key updates coming to the Tom Clancy’s Rainbow Six® Esports programs in Asia-Pacific, Europe, Latin America and North America, as well as its new plans for the Six Invitational 2021.  Recently postponed due to travel restrictions implemented by the French Government, the fans and pro teams’ most-anticipated Rainbow Six Esports competition of the year is now scheduled for May 2021. The Six Invitational 2021 will replace the Season 2021 Six Major in May. The exact location and dates will be communicated at a later date.

To leave room for the Six Invitational 2021, the calendar for Stage 1 has been adjusted in each region.

More information on the adjustments coming to the Rainbow Six Esports programs related to the Six Invitational 2021 new schedule, including the Stage 1 specific calendar, is available: HERE

Additionally, building upon the learnings from Season 2020 and community feedback, Ubisoft revealed the updates coming to the Rainbow Six Esports programs across all regions in Season 2021:

In Europe, the format of the competition will remain the same: an online round robin with best-of-one matches. The nine playdays will be spread over seven weeks, with only one match per week for each team, on Mondays, starting at 5PM UK time. The last two playdays will be played on a special weekend on the seventh week.  Ubisoft is also revamping the online qualifiers for the European Challenger League, with three open tournaments spread until the end of the summer, granting points and prize money to the participating teams. The top five teams across all three tournaments will join in the Group Stage the nine National League winners, and the two season 2020 relegated teams, making the European Challenger League a 16-team competition in 2021. The Playoffs will gather eight teams, competing in a double elimination bracket played in Best-of-three.

NORTH AMERICAN LEAGUE
With the merger of the US and Canada Divisions, 10 teams will be joining the 2021 Season of the North American League. The 2021 Season will be broken down into three stages and will be played offline at The Esports Arena in Las Vegas, Nevada.   The health and wellbeing of our pro players, partners and staff is our main priority, which is why, throughout the season, we will be working diligently to ensure the set up and respect of strict sanitary measures.

In order to maintain consistency between the regions, all North American League matches will be played in a Round Robin, best-of-one format with overtime. The stages will consist of seven weeks of play each with one playday per week on Wednesdays at 4pm EDT /1pm PDT. The seventh week of each stage will be a “Super Week” with three playdays back-to-back from Tuesdays to Thursdays beginning at 4pm EDT / 1pm PDT as well. Due to the ongoing COVID-19 Pandemic, the schedule may be subject to change.  With the merger of the US and Canada Challenger Leagues, the 2021 Challenger League will consist of 18 teams moving forward. There will be 14 playdays over the timespan of seven weeks. Teams will play in a Round Robin, best-of-one format with overtime.

LATIN-AMERICAN LEAGUE
For the 2021 Season, the Latin-American League will maintain its three-division structure – Brazil Division, Mexico Division, Latin America South Division – but will change its competitive format to best-of-one matches during the regular online stage in each division.

The three divisions will be organised as follows:

Each division – Brazil, Mexico and Latin America South – will have two playdays per week over four weeks, with an additional fifth week for Brazil featuring three playdays, named “Super Week”.

At the end of each stage, the best teams from each division advance to the LATAM League Stage Finals, a tournament that will give the top four teams the chance to qualify for one of the most prestigious Rainbow Six Siege tournaments in the world, the Six Major.

For Season 2021, the Asia-Pacific League will remain divided into two divisions, with the North Division – composed of teams located the northernmost of the region, meaning mostly teams from Japan, South Korea and South East Asia – and the South Division – composed of teams located the southernmost of the region, meaning from South East Asia, Australia and New Zealand. Each division will now gather eight teams and follow the same competitive format: an online round robin with best-of-one matches.  In addition of these two divisions, Ubisoft will continue to organise the South Asia Nationals to offer up-and-coming teams the opportunity to hone their skills and reach the international competitions.

During a stage, each division will have one playday per week over seven weeks.

At the end of a stage, the top-ranking team in each division will be automatically qualified for the Six Major, based on the regional league point system. The teams ranking 2nd, 3rd and 4th in each division will be joined by the two best teams from the South Asia Nationals, to decide who will get the two remaining slots for the Six Major in a special weekend of Playoffs. Ubisoft is also adjusting the R6 SHARE program in the region, with all 16 teams, from both the North and South Divisions of the Asia-Pacific League, now included.