Codemasters & Koch Media have announced that there will be a Day One Edition of DiRT® 4™ which will feature an exclusive Hyundai R5 rally car as well as a unique event* and Founder Icon. There will also be a GAME exclusive Special Edition that will feature the Day One content plus a Team Booster Pack that give you a unique team offer, staff and facilities bonuses, and an additional Steelbook option which includes the Day One content with a limited edition steel box. 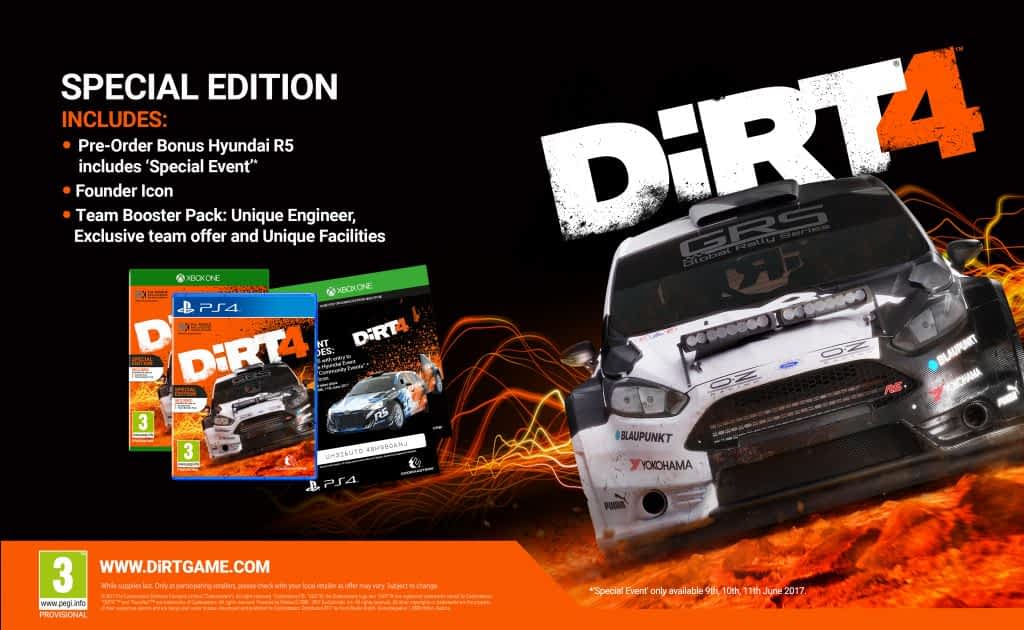 Double FIA World Rallycross Champion Petter Solberg and rally driver Kris Meeke have both been involved in the development of DiRT 4 and they give their thoughts on Your Stage, a game changing stage creation system, in the game’s latest video available here:

·        5 INCREDIBLE RALLY LOCATIONS WITH MILLIONS OF ROUTES – Australia, Spain, Michigan, Sweden & Wales
·        THE OFFICIAL GAME OF THE FIA WORLD RALLYCROSS CHAMPIONSHIP – Race at Montalegre, Lohéac Bretagne, Hell, Holjes & Lydden Hill in a multitude of different series
·        LANDRUSH – Short-course dirt track racing in Pro Buggies, Pro-2 Trucks, Pro-4 Trucks and Crosskart vehicles in California, Nevada and Mexico
·        JOYRIDE – Laptime challenges, smash challenges, free-play area and send challenges to friends
·        DiRT ACADEMY – Taking place at the DirtFish Rally School in Washington, USA, learn the skills, techniques and practice to become the best!
·        CAREER MODE – create your driver, compete across the disciplines, gain sponsors and build your team with clear goals and rewards
·        COMPETITIVE GAMING – Daily, weekly and month-long challenges against fellow players from around the world
·        NEXT GENERATION OF RACENET – Live ladder, leagues and tournaments, cross-platform leaderboards, enhanced CREST telemetry system
·        TUNING – Tweak your set-up based on vehicle, track and weather conditions to best suit your racing style
·        DAMAGE & REPAIRS – Wear and tear is faithfully recreated with an improved and realistic damage model. Damage can be repaired by hiring  Engineers to work in the team’s Service Area between stages but with a finite amount of time available. 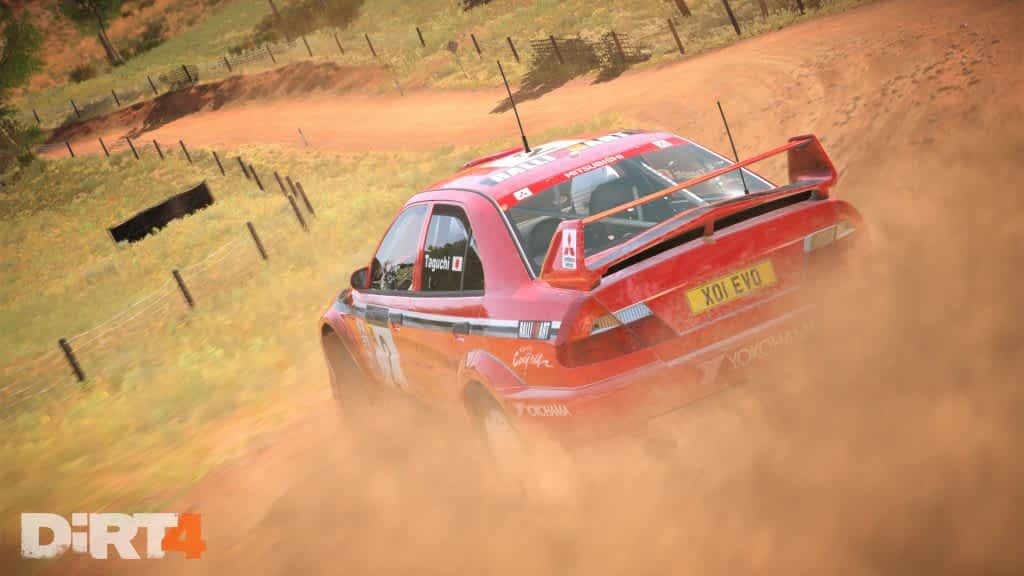 Your Stage allows you to produce a near infinite number of unique stages at the touch of a button in DiRT 4. Just select one of the five rally locations from within the game (Australia, Spain, Michigan, Sweden & Wales) and set the time of day and weather conditions. You adjust the route’s length and complexity using sliders before generating your own completely unique stage. If you are not happy with it, just press Generate again and create another. You can then race, share and challenge your friends to take on your bespoke stage.

Paul Coleman, DiRT 4’s Chief Game Designer, commented: “Your Stage is something that we have been working on since the launch of DiRT 3 in 2011. It allows players to generate an almost infinite variety of stages at all of the rally locations in DiRT 4. It’s a revelation as now our players will get the thrill of driving a new stage whenever they want.” 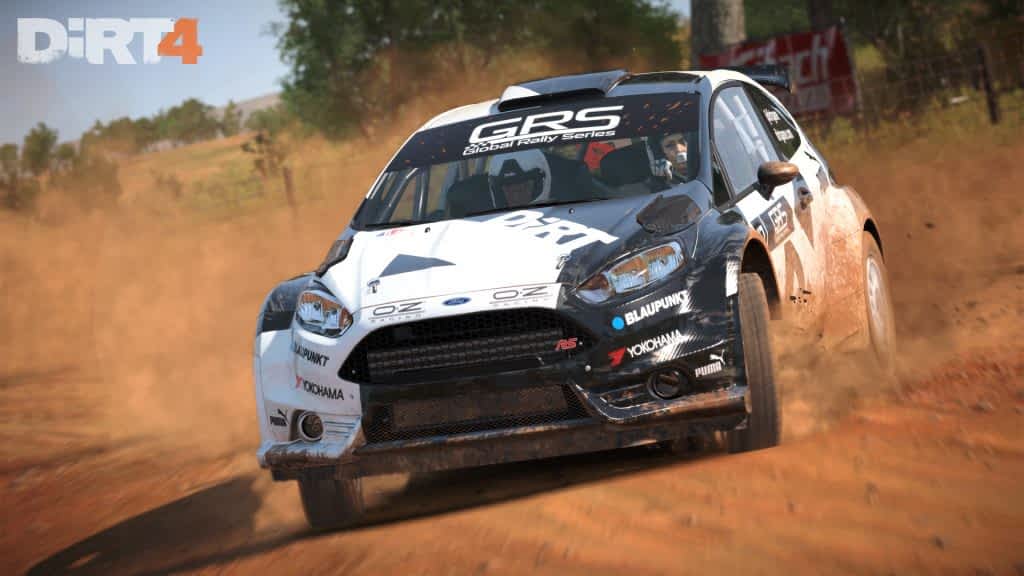 “It is extremely simple for you to create a stage but, behind the scenes, we have an extraordinarily complex series of rules and algorithms that put these routes together. Your Stage creates such a huge variety of routes, some that we would never have thought of crafting before, and they’re amazing to drive.”

DiRT 4 will fearlessly race to the PlayStation® 4 computer entertainment system, Xbox One and Windows PC in June 2017. DiRT 4 takes the passion and authenticity of off-road racing in both rally and rally-cross to the next level, whilst also reintroducing gamers to Landrush, thrilling short-course racing in trucks and buggies. 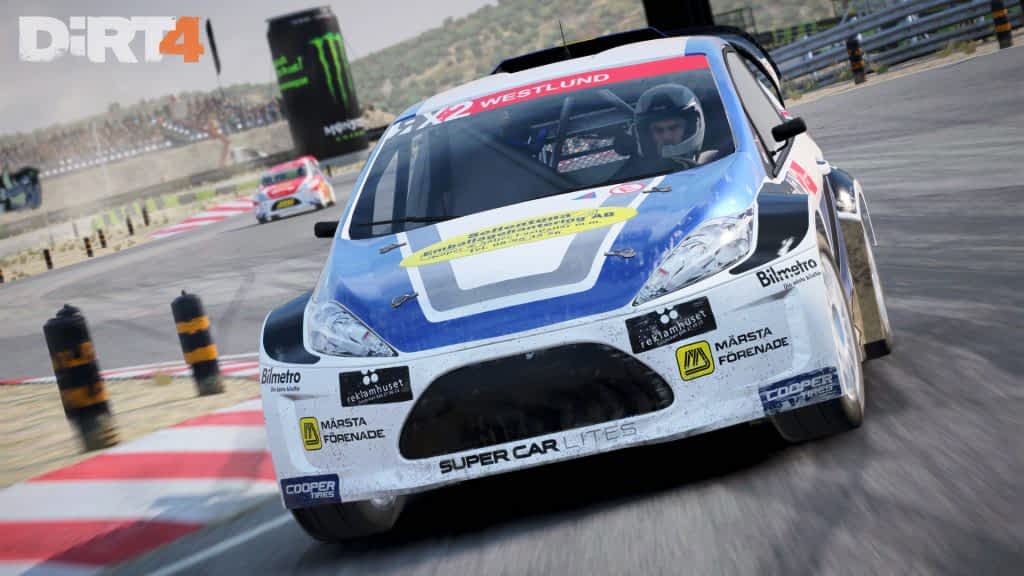