The first time I saw screenshots for Filthy Lucre I thought it was going to be a tactical turn based game along the lines of X-Com, but with bank robberies, and I was really excited. Once I booted up the game I quickly realized that it was much closer to a twin stick shooter (which is my least favourite genre). Thankfully though this is a simplistic high level description, and once I got past the initial disappointment and found its deeper elements it was actually pretty enjoyable.

Set in London and themed around the “Lock Stock” style gangsters movies, Filthy Lucre has a pretty simple setup. A local gangster has had his merchandise ripped off and has turned to you to get it back. You do this by visiting five different locations, each with three missions to complete, and try to recover as much loot as possible. Once you have completed one mission at each location you get the chance to take on a big score and pull off a bank heist, this ramps up the level of difficulty dramatically (perhaps a little too dramatically). 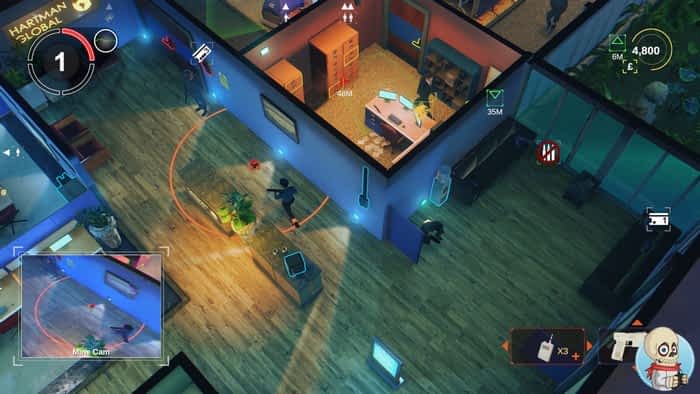 From it’s isometric view point you control your main character moving them around via the WASD keys, and aiming/firing with the mouse pointer as the cross-hair. There is an option to use a Xbox/PS4 controller, where you move the character with the left stick and aim with the right stick, but I found the sensitivity on the right stick made it very difficult to aim accurately. While the keyboard options has its limits for character movement, the boost to the aiming made it a sacrifice worth taking.

There are a number of customization options for your character to change the sex and look but these are purely cosmetic. They have absolutely no impact on game play. There is however a nice variety of weapons and gadgets that unlock as you progress. Starting out with the silenced pistol and steadily progressing up through more and more deadly options. The same goes for the gadgets, noise makers and flash bangs can be upgraded to mines and frag grenades.

At its core it is a stealth/puzzle/shooter. While you can approach the missions in a number of ways, there is only really one style that works effectively and that is to sneak around and try to remain undetected for as long as possible. Within each level you have the puzzle elements where you need to plan out your route in order to avoid guards, open locked doors, turn off cameras, unlock secret entrances, find security passes etc.. As mentioned there isn’t really a set plan or route to follow so you can mix it up a nice bit and try new routes, new techniques, using different weapons and gadgets. 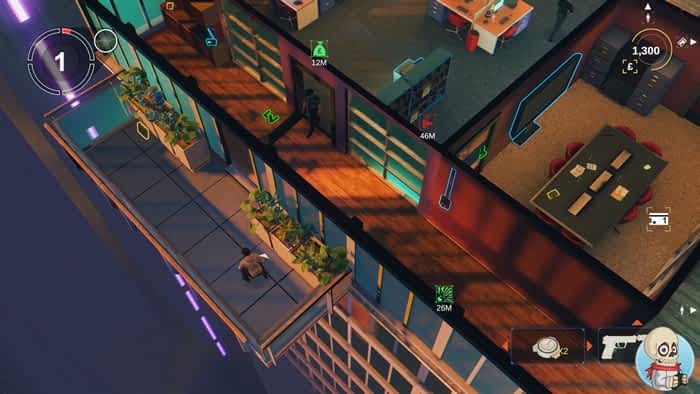 Staying out of sight is the key to survival, but you can survive alerting the guards if you act quickly. There are a few stages of alertness, the first is just a curious stage. Something has alerted the guards, perhaps a sound. They will start to search the area for anything unusual. They are not necessarily looking for you at this point, they are just looking around but are more alert. The second phase is when they spot you, you will at this point lose the “undetected” bonus, but if you act quickly you still have time to stop the alarm being raised by killing everyone that has seen you. The last stage happens when you fail to kill them in time and they get the chance to radio for help and call in reinforcements. At this point, unless you are heavily armed, you should be high tailing it to the exit point.

Overall the freedom of choice plays out well, but there is one massive pain point that really has a negative impact on the ability to enjoy the game. There are no mid mission save points, if you die you need to restart. This normally works because it adds a level of tension to a game, but because of the amount of laborious tasks, slow creeping and backtracking involved in each mission it becomes really frustrating really quickly. Killing the same guards in the same place, putting their body in a body bag, and slowly carrying them out to a quiet location gets old quickly. It seems like a silly complaint for a stealth game, but when you have to repeat the same 25 min section ten times, that death/retry screen isn’t met with a “one more go” it is met with “I can’t face into that again”. This is a death nail for a game like this. 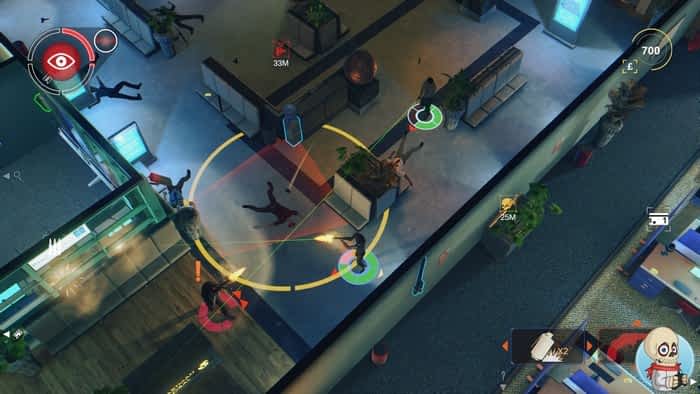 There is a risk reward system built in, the longer you sneak around the more loot you can get, but the greater the risk of getting killed and losing it all. Interestingly enough you don’t have to complete all the secondary tasks in a mission at once. At any point, rather than dying and restarting, you can make a break for it, and if you reach the getaway point you get to keep anything you have already pilfered, you also gain some XP and the cash. However when you return to replay the mission to complete the other remaining tasks you find the whole mission has reset completely. You do need to work through the whole mission from the very start again. The only real benefit of escaping early is if you need a small amount of cash or XP to unlock a new weapon or gadget.

Overall: This type of game was always only going to appeal to a niche audience of people who like stealth games. When things are going your way and you are making good progress through the mission Filthy Lucre is a very enjoyable experience. However the frustration from repeating the same tasks over and over after dying was really off putting.