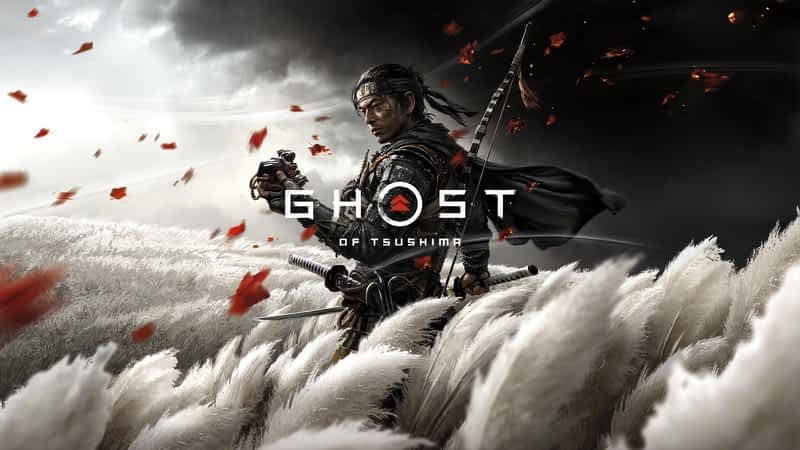 Disclosure Note: Sony provided us a copy of the game early for the purposes of completing this review.

When Sucker Punch talk about the Ghost of Tsushima. They describe it as “a labour of love” for a team that grew up on a diet of classic Samurai films and comics. You can see that early influence flowing through every pore of the game.

If you grew up on these classic movies then you know exactly what I mean. If you are too young, perhaps Tarintino’s Kill Bill is a good reference point.

Missions open and close with an iconic gong over the title screen (shown below). “Showdowns” (mini-boss battles) are introduced with a staredown between both fighters. Multiple camera angles are cut together as you see them slowly reach for their swords before exploding into a fight.

This game is less about creating a hyper-realistic experience and more about recreating the world of a “movie Samurai”. You can even play the whole game with a black and white grainy filter for that classic film look.

There is an amazing Camera mode that lets you, at any moment in the game, create your own little animations. You can add music, camera angles, blur effects and filters. I’m really looking forward to seeing what the community creates with this tool.

Sucker Punch has a history with open-world titles, most noticeably the Infamous franchise. Where Infamous was set in a city with a lot of verticality. Ghost of Tsushima is in a more rural, flatter, landscape. But that early franchise DNA is there to see in the player’s movement.

It is incredibly easy to get around. Running, jumping and climbing is smooth. Moving over obstacles, through gaps, and under houses to evade enemies becomes second nature very quickly. When it is spliced seamlessly with the combat it is a thing of beauty.

Set in Feudal Japan, it comes as no surprise that travelling long distances is limited to horseback. Thankfully it is not the usual chore (I’m looking at you RDR2).

A special note goes to the navigation feature. Rather than having an intrusive glowing arrow or a GPS style line to follow on a mini-map. You have a gentle wind that blows through the long grass and trees to help guide you. It is subtle and fits perfectly in this world. Importantly it keeps you in the game rather than spending your time looking at a mini-map.

Ignoring for a moment the breathtaking landscape that lets you get lost in the scenery. It is the simple quality of life elements that make travelling across this map a pleasure.

Like being automatically weaved around trees in a forest rather than getting knocked off your stride when you bang into them. They have cleverly not given the trees physical hit-boxes. this gives the illusion of a forest without the annoyance. It is amazingly well done.

Being able to grab collectables without dismounting (simply hitting R2 as you race by) means that you are not wasting time collecting or getting stuck in mini animations.

These might seem small, but over time they ensure the game retains its enjoyable flow.

Fast Travel does open up once you find locations to help speed up your movement.

Combat, unlike most games that start easy to allow you time to ease in. I felt Ghost of Tsushima actually starts difficult. It seems purposely designed to be frustrating. Enemies with long spears are difficult to get close to. Enemies with shields are difficult to kill as they regularly block and push you back, to the point where I was getting pretty frustrated and thought I was going to hate the combat.

But as you gain new moves, learn new skills and unlock new weapons you learn how to combine these to defeat the different types of enemies. For Example, the annoying enemies mentioned above are very difficult to get close to until you unlock the Kunai (small throwing blade that staggers them) and learn the stance that lets you do jump attacks and parry attacks.

Suddenly you have the skills to slip in behind them, knocked their foot from under them and impaled them with your sword.

The better you get at combining these different skills, the more like a master you feel. As you progress enemies do get bigger and harder, but you feel like you are becoming smarter and more skilful not necessarily just stronger.

Skills, weapons and new moves are unlocked by earning XP which is converted into Technique Points. Each point can be spent across multiple different aspects and you are given a lot of freedom as to where you want to spend.

There are three high level groupings Samurai, Stances and Ghost. (see the pic below)

Samurai: Within this category, you have four different areas of focus. The basic skills of Evasion and Deflection (dodging and parrying incoming attacks). Mythic which are Master Legendary Combat Skills that can be unlocked from completing specific quests and are devastating in battle. The fourth area Exploration will make use of the Wind to help you navigate to find Health and collectables.

Stances: The four core fighting styles (or stances). Each stance offers something different to help deal with a variety of enemies. One stance is suited to enemies with swords, another for shields, another for enemies with spears. The last is better suited for the large brutes.

Once you have progressed through enough in the game to unlock a stance, you can then choose to spend Technique Points to learn more skills within that channel to become even more devastating.

Ghost: Ghost Weapons help you become less Samurai and more sneaky. Examples here include a small handheld blade (Kunai) that can be thrown to stagger enemies. Smoke bombs or wind chimes to help you distract and disappear. And even some mini grenades to knock enemies down.

The last Ghost area is Evolving Tactics which again offer you even more options for combat. Stand Offs, as you enter an area you can press up on the D – Pad to unlock a stand off. This is a timed event that lets you instantly kill an enemy. The negative here is you shout at the enemy to face you so they all show up. Not advisable if there are more the 2 or 3.

This section also lets you unlock Archery so you can sit on a perch far away and pick off enemies and Assassinations skills for when you get up close and personal.

On top of all that, you can also collect resources out in the world (Iron, Gold, Linen, Predator Hides and supplies) that can be spent on upgrading your weapons and Armour.

(One tip for starting out, is that you don’t get to upgrade your weapons until you reach the first monastery. So even though you have resources gathered don’t waste any time trying to find where to spend them until the game unlocks this).

After all that upgrading, you can still unlock customisations for your weapons and armour to ensure you look cool. Which is the most important bit!

The Samurai are a warrior class, they fight with honour. Your uncle makes a point to teach you this early on. Hammering home “that as a Samurai you must always face your enemy head-on so you can look them in the eye”.

Easy done when it is a band of poorly armed roaming bandits. But when the overwhelming power of the Mongol empire shows up on your island and massacre the Samurai. You are forced to rethink this honour system and wrestle with the less respected ways of the “Thief” and “Assassin” to become The Ghost.

This isn’t the traditional good or bad path but rather it opens up different combat options. Any encounter can be handled in any way you see fit. If you are a master Samurai and want to walk to the front door of a castle and call them out, you can do this.

If you want to embrace the way of the Thief and slink in behind enemy lines and steal resources, or slit throats like the Assassin you can go this way too.

The choice is yours. You can play it all one way or you can end up mixing them all up in a style that works for you.

Missions (or Tales) are split into three main categories. The Main quests Jin’s Journey is the bigger set pieces that progress the story.

The Tales of Tsushima, are more focussed on building up your army of allies. You find others and then help them so they can free family, recruit soldiers and generally liberate the island.

The third type is the Mythic Tales which are very much side quests, often picked up from NPCs. Where you have to go investigate some peculiar goings-on. While they seem unimportant, they are not to be ignored as the rewards are well worth having.

For the most part, they are pretty enjoyable if you mix them up. But like all open-world games, there is only so much variety to go around before you find yourself repeating the same type just in a different setting.

Thankfully getting around the world is so pleasant, and combat is so rewarding that you don’t really get too bored at any point.

The Mongols are an interesting enemy. They learnt Japanese, they studied the culture and geography of Japan. They really understood their enemy before attacking. On the face of it, Khan almost seems reasonable, having long deep psychologically draining conversations with his captures.

When he offers peace (or great mercy) to end the violence. It is done in a civilized tone, pushing the blame for the continued brutality on to the Japanese leadership absolving himself of the tremendous violence his army was responsible for.

Overall: A tremendously enjoyable and refreshing break from all the open-world first-person shooters or hyper difficult sword fighting games. This is an action-adventure that is designed to make you feel like a movie Samurai and on that front it delivers.

The world is visually stunning, some of the design elements are staggeringly beautiful, especially the foliage. To the point, I spent the weekend in the garden centre asking about Japanese trees with red leaves!

Navigating the world is rarely a chore, the gameplay in large sections is smooth and relaxing, and the combat is exciting and satisfying.

The Open world has a good balance of side missions if you want to spend hours progressing your character. But it is an open-world game, even if it is a very high-quality one, it comes with a certain warning. If you want a tight 8-hour narrative this is not for you.

Clocking in at around the 50-hour mark this is a sprawling epic adventure that takes a serious investment but one that is ultimately rewarding.