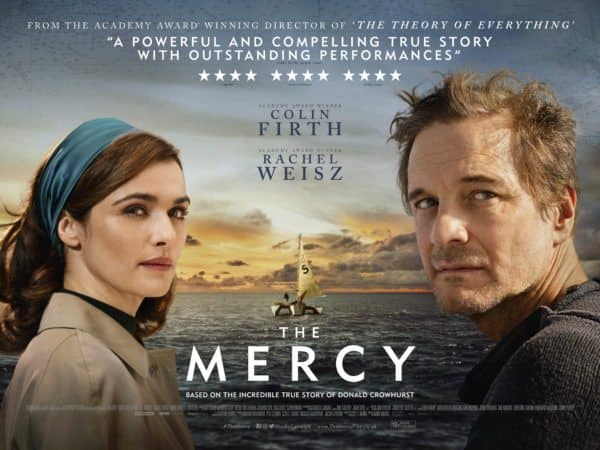 The movies are often quoted as being ‘inspirational’ to audiences; a world of escapism in an often crushingly practical society. The sports drama is an excellent example of this; watching your average Joe (or team of average Joe’s) succeed in undertaking a monumental task, seemingly well outside their abilities. It’s a format that served Rocky, Hoosiers and even The Mighty Ducks particularly well. So it’s an odd yet refreshingly grim take to look at the story of a man who battled the odds, only to find himself woefully under-prepared and practically destined for failure. 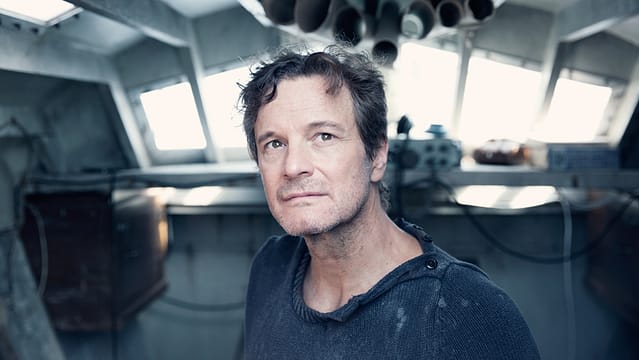 The Mercy tells the story of Donald Crowhurst (Firth), the amateur sailor who competed in the 1968 Sunday Times Golden Globe Race. His noble aspiration is become the first person in history to singlehandedly circumnavigate the globe without stopping.
History drives a divergent path to his dreams however. Donald never returned from his voyage and, when his boat was found in 1969, it was revealed that much of the progress he communicated with his wife Clare (Weisz) was wildly exaggerated.

Much emphasis is placed on the plucky Englishman, played by none-better Colin Firth, and how his unshakable spirit can’t be weathered by the threat of storms or isolation. For the first half hour at least, it hits not dissimilar beats to Cool Runnings.
Unfortunately, this is based in facts and, despite the Hollywood trappings, Crowhurst is a man merely acting out an underdog story, with grounded-in-reality consequences. His inexperience isn’t cancelled out by his can-do attitude. Setbacks aren’t rectified at the last minute, nor are they an opportunity for him to exercise his iron will. When holes begin to appear in the hull (literally and figuratively), the grim scenario is reflected in both tone and cinematography. The previously relied upon steady-cam is flung overboard once Donald is adrift, and the brash colours of the swinging 60s are washed out the longer we spend on the waves.

As depressing as it sounds, this makes for a far more relatable story than the standard underdog tales mentioned previously. In Donald and Clare, we have a fully–fleshed out onscreen couple that are both whimsical in nature but also grounded in reality. That is worthy of mention purely for the rarity of such a depiction.
Weisz’s role is given more emphasis in the film than in the history books. She adds layers of humanity, not just to her character, but to Donald as well. While Donald fought the elements and made the decision to lie about his progress, it was Clare Crowhurst who ultimately had to deal with the complicated repercussions of that decision. In her, we are reminded that Donald’s fate doesn’t represent the full tragedy; the effects were felt by many.

On that note, for this film to surface now is certainly quite telling. The epitome of Englishness, sailing on his own into open waters, only to find he grossly underestimated what that entails…it’s impossible not to see the distorted reflection of Brexit in its waters. In a wonderful, early moment, we see press agent Rodney Hallworth (Thewlis) encouraging Donald with robust flattery. He enthuses that, in Donald, he sees something lost in present day England. Aspirational determination, a plucky derring do, a sense of adventure. As expected, it brings a satisfied smile to Donald’s face, but rings harrowingly false for the audience. It is this same cajoling of the every-man that resulted in the Brexit outcome (and similarly, the elevation of another ill-prepared Donald across the waters). In retrospect, talking about making either Britain OR America great again seems like a wistfully naïve sentiment.

And while the tone makes this argument very one-sided, The Mercy is careful to show that Donald Crowhurst was inexperienced, but not inept. The problems he faces are overwhelming but he keeps the plates spinning as long as physically possible, despite everything. There are even moments of profound liberation, as he spots a pod of dolphins swimming alongside, or plays his harmonica on a perfectly calm ocean on Christmas Eve. These moments are brief however, jostled aside immediately by the foreboding knowledge that things aren’t going to end well.

How things ultimately play out is no mystery, but how it is depicted is an important distinction to make. Pointedly, The Mercy toys with conventions of journalism and how the facts aren’t always ‘the facts’. When Clare is questioned after the event has taken place, we are asked to distinguish between performative exaggeration and outright lying and find that the line isn’t as clean cut as you might initially think. These deeply affecting questions, in the context of the current political climate, couldn’t possibly resound as we effectively as they do if it weren’t for Weisz’s heartfelt performance, and Firth’s preceding scenes of melancholy reflection.

The Mercy utilizes a historical tragedy as an effective metaphor for political upheaval, and keeps the audience invested with emotional performances from its two leads. Despite its wide appeal, this is a multi-faceted film that impressively and inevitably incurs melancholy reflection on the choices we make. As both citizens and individuals.