Battlefront II has its problems, all aspects of the game have areas that can be improved; that said, the game has a lot to offer, with maps taking players to some of the most iconic locations in Star Wars, a campaign that humanizes the Imperials and improves starfighter combat. The previous game got the little things right but missed the big details. The sequel has done the opposite. Many fans were disappointed in 2015 when Battlefront was released without a campaign, so it made sense that in 2017, the Campaign for Battlefront II would be the major selling point. Let’s be clear, however, that the game isn’t worth buying just for the campaign. The story is actually very good, but it only takes 6 hours to play. Given that it is primarily an online shooter and a short campaign is the norm for online shooters, it’s not enough to consider buying for offline play only. 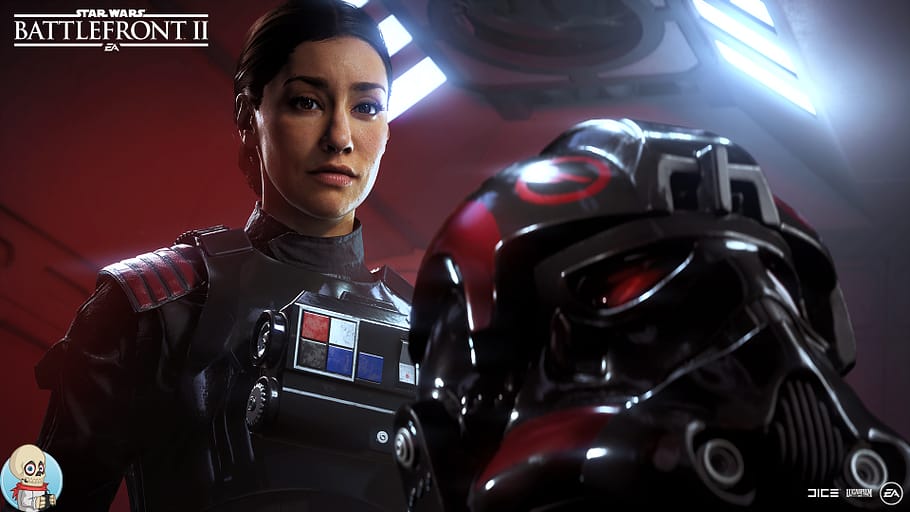 The story follows an Imperial Special Forces Soldier named Iden Versio as she serves the Empire after the battle of Endor. It’s well written and takes a unique look at the Empire, and despite taking a safer route than expected, it is still an excellent addition to the Star Wars canon. For those of you who enjoyed the recent Star Wars books and comics, you will be happy to see how this story ties into them at points.
The story has continued with the new free DLC; taking place during the events of The Force Awakens, it has set up a new Star Wars story with a lot of promise. The introduction of Classes is a good change. Four main classes exist, but being familiar with two prepares you for most, if not all battle scenarios. While first-person mode is available for the four basic classes and star fighters, it’s not available for specialist troopers, heroes, or ground vehicles. This constant switching of perspectives becomes annoying after a while, and it seems like a ridiculously simple detail to not include in the game. The Star card system has made a return. For those of you unfamiliar with this: items such as grenades or rockets are equipped as abilities that refresh after use, rather than an ammo or perk system. This makes sense for tools like jetpacks, but not so much with grenades and rockets, which would typically be limited in use in any other game.

The progression system for both the Star cards and the weapons is fair and sensical; acquiring new weapons requires a quota of kills, as the class it’s associated with and has challenges to unlock attachments for each weapon. Star cards can be made by crafting materials or one in the loot boxes. You can further upgrade the cards by increasing your levels.

Vehicles handle very well and are offered in great variety; Star Wars is known for its incredible vehicles and this game lives up to that reputation. The most iconic ships, speeders and transports are all included.
The Starfighters are the obvious choice for best gameplay and have improved in handling and variety. The addition of the bomber class allows for a different style of flying which, while being slow and difficult to maneuver, can withstand and cause significant damage.
The vehicle system is not without its flaws, however. Battlefront II has progressed backwards regarding vehicle spawning. Having played the original Battlefront II, it was more realistic finding vehicles on the battlefield and entering them. Now players spawn into vehicles after collecting enough points. This is understandable for Star Fighters but not for ground vehicles. A major missed opportunity was with the starfighters. While they remain my favourite aspect of the game, these fighters can only be controlled by one player in-game, yet they are designed for a two or three-person crew – The Republics ARC-170, and the First Order SF Tie Fighter, for example. In the Force Awakens, fans were given an amazing getaway scene where Finn and Poe escape in a two-man Tie Fighter by working together, one flying and the other shooting; players were robbed of the opportunity to work together like this. There are drawbacks and I understand why it might not be great all the time, but it’s still a missed opportunity, in my mind.

Battlefront II focuses on multiplayer, with great missions and fair competition between players, making it no doubt the best aspect of the game. Five game modes are available, though I’ve found Starfighter Assault and Galactic Assault to be the best of them. Starfighter Assault is a playlist of epic starfighter battles, a huge improvement to the predecessor. There is more purpose to the engagements, with both sides given specific tasks to carry out. Some maps are obstructed with asteroids, ship wreckage and Capital Ships, giving plenty of opportunities to pull off fancy maneuvers, adding an extra layer of challenge. There is no offline starfighter mode for now, which is a shame for all the players who want to engage with bots for practice, or just to get the hero experience that most players never get to feel in the online multiplayer mode. Galactic Assault features the largest maps in the game; these epic 40 player maps really take you in. The missions for each map vary, a step up from the previous game. However, each map has just one mission and one era/timeline, which is a waste of good maps. I’d be interested to see a fight between the Rebellion and the Empire on the streets of Theed. The other game modes have smaller maps that don’t provide much else other than the classic shooter scenarios. Strangely, there is no map selection, so players have no choice but to join at random points in a playlist of maps. This becomes annoying, particularly if you wish to play on a specific map. The maps themselves are beautiful and accurate, containing countless nods to the films; Briefing Room on Yavin 4 from ‘A New Hope’, Maz Kanata’s Castle in full, and the Cantina in Mos Eisley. The maps available offline are less impressive they are smaller maps that become boring after the first few playthroughs. With a large roster of heroes to choose from, spanning all three trilogies, each have their own unique skill set. While not all heroes are balanced and some a lot more useful than others, all are fun to play and have a unique presence. An issue for fans that are well versed in Star Wars lore, would be the use of heroes from different eras; while it’s fun to pit Rey against Darth Maul, it does take away from the more immersive qualities of the game.

If you’re a Star Wars fan, who enjoys first person shooters, this is the game for you. If somehow you have avoided spoilers for the story and want to play it without spoilers I’d advise playing it as soon as possible. However, I don’t advise buying this game just for the story.
If you want to explore the maps unthwarted by other players or just want to feel like a hero in classic battles but don’t want to play the multiplayer I’d advise waiting for EA to make some adjustments to the game to cater for the offline players.