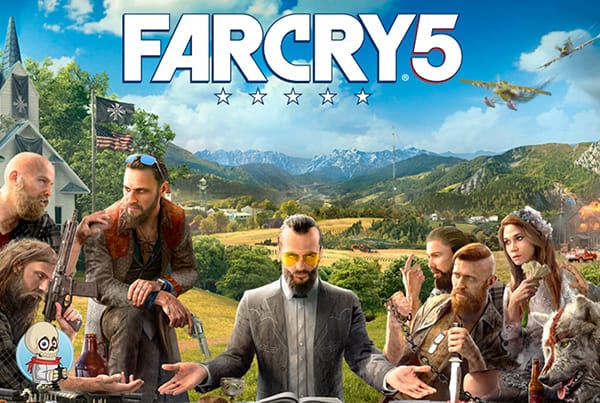 Far Cry 5 will go down in history as one of Ubisoft’s most successful games; by staying true to the franchise, while making much needed improvements to narrative development, the game has earned that title, surpassing many high standards it set for itself. Co-op mode continues to allow friends to play together in a world meant to be shared. The customization and emphasis on creating a unique experience gives players real freedom without losing perspective on the narrative.

The residents of Hope County are an excellent reflection of the best and worst of society. A diversity of ideals is on display; there are people hellbent on protecting others from the radical cult, Eden’s Gate, seeking to bring law and order back into society. Some take advantage of the chaos for their own gain, while others seem to just be enjoying the chaos. A powerful emblem of the issues this game explores lies with the central character; you take up the mantle of a ‘rookie’ deputy, that can be male or female, and be of any ethnicity. Considering the game takes place in the present day, and in a region that is struggling to accept others for their differences while dealing with the clutches of religious rule, this game really does hit nerves.

First person has two settings, one for improving view of the world and another for a better view of your weapons – the latter makes the game more immersive. The story progresses as the player completes missions of their own choosing in their region, so no one player will have the same story; choice is a major factor in this game from start to finish, and every playthrough is governed by these choices. Despite this freedom, I do feel that some parts of the game have missed opportunities to incorporate choice. One set of missions had an obvious conclusion that I had hoped would allow me to take some form of narrative control, but instead it had a fixed path that required I finish it to progress. Each of the three main regions have a uniqueness, and suit each of the bosses affiliated with those regions. Every location and base appear to serve a specific purpose for the cult and equally has a believable connection to the county before the cult had arrived.

Side missions, like the Prepper Stashes, help build a picture of the past for a region. They also show the paranoia rampant in the area long before the cult had arrived. Hunting missions are fun and sometimes get very weird; animals are what cement this game in reality, and your encounters with them can make for some of the best entertainment in the game – they can aid or destroy your plans for as a wild card in carefully prepped missions, and their interactions with other NPCs make for some incredible moments. Guns for Hire have changed the game this time around. While good companions for stealth are available, there are more characters that encourage loud and exposed gameplay. This is most notable in the capturing of outposts. A player’s companions may be seen, but the player may remain hidden, directing the companions from a vantage point – though the fighting may be loud, the player may still acquire the stealth bonus.

Progression in this game is easy to get the hang of, and there is a path for most styles of play. Weapons are varied, but so far, with the exception of one alien weapon, there has been nothing new brought to the loadout. That said, there is more than enough to choose from to allow for a variety in combat options. The Skill system is easy to use and allows players to develop their skills exactly as they wish. Clothing and accessories are all up for customization. While there are outfits that nod to other games, a Sheriff / Deputy uniform would’ve been a good addition, considering your role.
Vehicles are important in this game, and a lot of them have customizations to fit with the apocalyptic undertones of the narrative. Some cars and trucks come equipped with machine guns controllable by the driver, giving a Mad Max vibe to some of the car chases. Most ground vehicles handle well, changing appropriately with the terrain. The auto drive feature is useful, but it is more difficult to regain manual control of the vehicles than it was in Far Cry 4.
Planes are easy to handle and easy to land; landing in this game is almost comically easy. While it is hard to do any fancy maneuvers, the flying is fun, and the dog fights are entertaining.
Helicopters are probably the best mode of transport in the game. Their speed and maneuverability allow for easy traversal of the countryside. Gyrocopters were probably the best vehicle on offer in 4, however, made no appearance in FC 5; vehicle-to-vehicle takedowns are really missed, and their absence feels like a step backwards for the franchise – they captured the action movie feel at its most prevalent. Crafting is also sorely missed and has been removed by adding the crafting features to the Skills tree. But this game offers a lot more in narrative and customization to make up for this.

Villains have been the main weakness in a lot of Ubisoft games; not so here. The Father is not only riddled with complexity but used wholly throughout the narrative. Rather than having a few cutscenes in the middle and bookended with two scenes at the beginning and end, the relationship with Joseph Seed bordered on intimate. His generals/family had very different methods of interacting with the player. These interactions had a real payoff in terms of the players’ insight into the cult and its beliefs.

If you like the Far Cry franchise, or explosive action-adventure games in general, this game is what you need to be playing. This game has a lot to say about the world today, and almost functions as a satirical review of society. It deserves to be played both for that contribution and that it is a well strung together game that has been made with passion for the art.