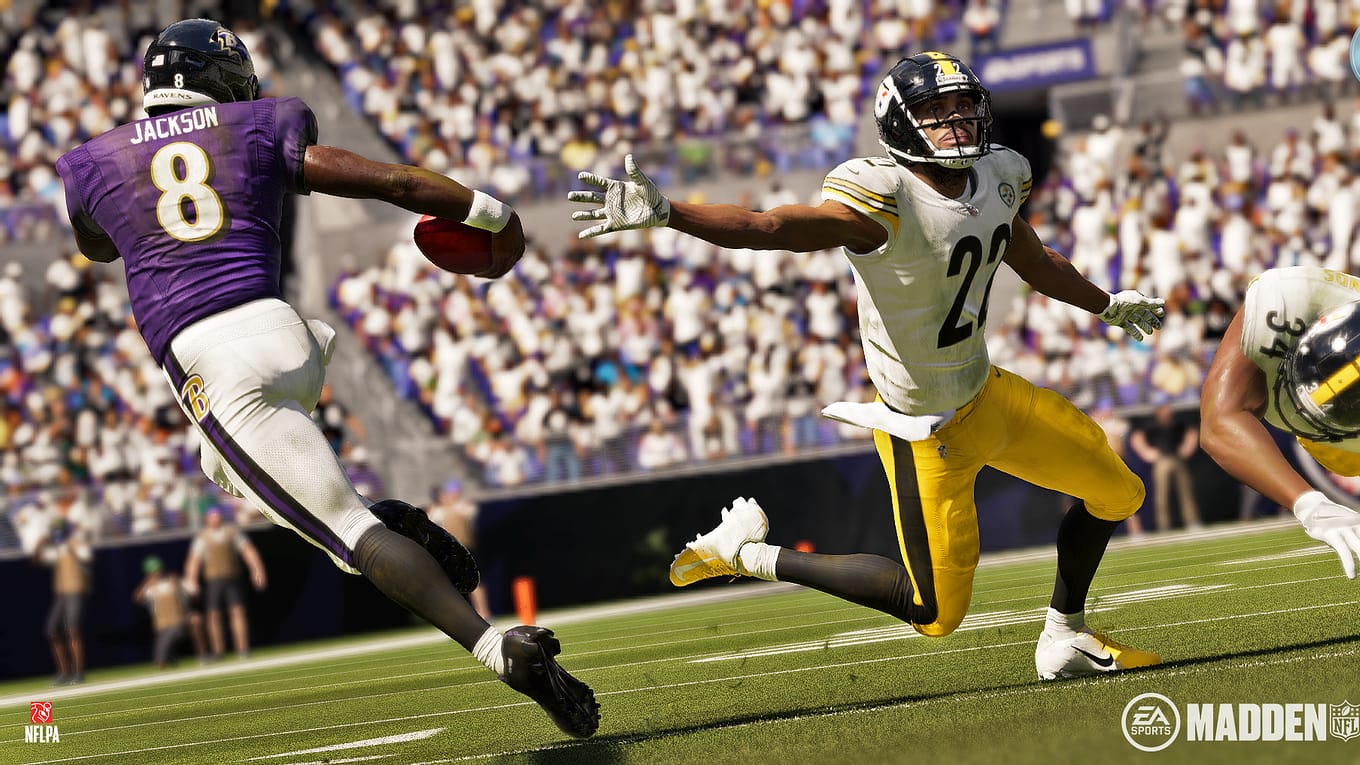 Like all events and sporting endeavours around the world, the NFL has ground to a halt because of the COVID-19 pandemic, and any chance of football won’t be seen until mid-September at this rate. In the meantime, we take a look at EA’s Madden 2021 to see if it improves on last year’s game, and whether it makes us miss football more.

Building on last year’s set of improvements, and uncovering a host of other niggling bugs, a list of updates for the game was released and will be implemented periodically towards the release of the next instalment in Madden. For now, though, Madden 21’s improvements have created a much richer game day atmosphere; the new PA Announcer sounds authentic, with more tailored intros and calls on the field, and the stadiums look fantastic, all the extra details shown off with the improved lighting. Some coaches and players look incredibly realistic – however, there are others in need of further attention are not as recognisable. The commentary is the same team from last year and will be updated through the season. We were unable to explore this more, due to the lack of pre-season games this year, but for the most part it seemed on point, after playing several games.
The new HUD and presentation are slightly improved for gameplay. Player animations have been improved both on and off the field; players can now do one of four types of celebrations after a sack, tackle for a loss, 1st down and touchdown; however, after enough hours racked up, these can get repetitive after a while. Taking a leaf out of FIFA’s book in this case would really benefit here; it would be good to customise these or bring in a celebration menu. Breaks in play bring some new interactions during time outs; if your team is ahead, you can see cutscenes of players celebrating on the bench, or coaches talking with players. The effect is completely lost, however, in some cases; if a big play is gained, it is not rare to see a number of players on the field execute the same animations.

Madden’s three core game modes are as follows; Madden Ultimate Team, Franchise Mode and Face of the Franchise. Ultimate Team is still largely the same from last year, open packs and build your team, although some new sets and challenges have been added for you to complete, taking you right through from rookie to pro. It’s as rock solid as it gets,
Franchise mode is a solid mode and is great to play, but it hasn’t had any improvement to it this year, nor since Madden 19 in fact. You can have the franchise mode online and play with friends or offline for solo mode. The only small additions were merely a few aesthetic tweaks, like a new colour background, improvement XP gained and lost – other than that, it’s same old.

Face of the Franchise mode returns, which is Madden’s version of FIFA’s the Journey/ The Longshot. A story-driven career mode, customise a character, pick a school location and a state (no international options) and a logo. Step through the tutorials that are built into the story, interspersed with memories of your custom character’s high school and college days before being drafted into the NFL. The story defaults your player as a backup Quarterback at the start, but options to change roles will become available later; multiple choice questions help you suit your playstyle and abilities for your character. Once drafted, an option appears with a list of objectives, called Rise to Fame – reach certain goals to rank on the leader board of becoming the greatest of all time.

In previous years, the GMFB (Good Morning Football) was the bridge between loading screens in Face of the Franchise; this year, it is more focused on Rich Eisen and his podcast to lead the story along, but it stops halfway through. Dialogue is always expected to be a little cheesy, clichés abounding, and you can just feel it when a predictable scenario rears its head. This mode was bogged down with bugs and breaks for us, all ranging from games not loading, character models not loading, no audio on cutscenes and more besides, which was disheartening.

The Yard, a new mode that looks to FIFA’s Volta and NBA 2K’s MyPark for inspiration, makes its debut here. A casual 6 v 6 match, I found this mode a bit challenging; play arts are the same, the double and triple passes are a nice feature but buggy at times. Once you score, players have a choice to go for 1,2,3 extra points at different distances from the end zone, this adds a twist to scoring plays. It’s an interesting addition to Madden’s roster of game modes, and has great potential, but takes itself far too seriously by following top of the league rules – instead of letting loose like its FIFA and NBA counterparts, the Yard would be much improved if it didn’t hold itself to such a high standard, and have a little fun.

Overall, Madden NFL 21 is a reasonably good game, and a great football game at its foundation, but that’s it – it’s a tidier version of Madden 20. It feels like much of the effort put into it was well-intentioned, but misplaced. For fans of Franchise mode, no new updates were released at the time of writing this review, but we look forward to the patches and additions that are in the pipeline. This installment of Madden gives the impression that EA have taken two steps forwards with presentation and gameplay, and have poured a significant amount of energy into a polished appearance, but the lack of new features on release has pushed it several steps back. The Yard shows that EA are trying something different, but in this case, it doesn’t land as well as it should; the series feels a little stagnated in this incarnation.